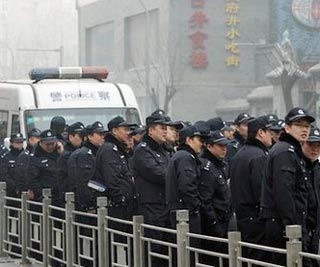 Police officers stand guard near a restaurant which was a planned protest site for ‘Jasmine Revolution’ in Beijing.

Up to 15 leading Chinese rights lawyers and activists have disappeared since Saturday amid a nationwide police mobilisation, according to activists, while the government appeared to censor Internet postings calling for the demonstrations.

“We welcome… laid off workers and victims of forced evictions to participate in demonstrations, shout slogans and seek freedom, democracy and political reform to end ‘one party rule’,” one Internet posting said.

The postings, many of which appeared to have originated on overseas websites run by exiled Chinese political activists, called for protests in Beijing, Shanghai, Guangzhou and 10 other major Chinese cities.

Protesters were urged to shout slogans including “We want food to eat”, “We want work”, “We want housing”, “We want justice”, “Long live freedom”, and “Long live democracy”.

At Beijing’s central Wangfujing shopping district where protesters were told to gather, a massive police presence was in place but no demonstrations were seen as thousands of shoppers milled about on what is normally a busy shopping day.

At least two people were seen being taken away by police, one for cursing at the authorities and another person who was shouting: “I want food to eat.”

According to Internet postings, only a few demonstrators appeared in other cities, although large police contingents were seen at designated protest spots in Shanghai, Harbin, Guangzhou and Chengdu.

“I don’t think the call to protest was serious, no one really intended to protest because there are too many police,” leading rights lawyer Li Jinsong told AFP.

“By taking this so seriously, police are showing how concerned they are that the Jasmine Revolution could influence China’s social stability.”

As the word spread on the demonstrations, numerous political dissidents and rights lawyers were placed in police custody, activists said.

“Many rights defenders have disappeared (into police custody) in recent days, others are under house arrest and their mobile phones are blocked,” rights attorney Ni Yulan told AFP.

“The police detachment outside my door has increased. They follow us if we go out,” Ni said of the surveillance on her and her husband.

Telephone calls to prominent rights lawyers including Teng Biao, Xu Zhiyong and Jiang Tianyong went unanswered Sunday. Friends and other activists said they had been detained by police.

Chinese authorities have sought to restrict media reports on the recent political turmoil that began in Tunisia as the “Jasmine Revolution” and spread to Egypt and across the Middle East.

Unemployment and rising prices have been key factors linked to the unrest that has also spread to Bahrain, Yemen, Algeria and Libya.

Searches Sunday for “jasmine” on China’s Twitter-like micro-blog Weibo produced no results, while messages on the popular Baidu search engine said that due to laws and regulations such results were unavailable.

Some Chinese Internet search pages listed “jasmine” postings but links to them were blocked.

The Chinese government has expended tremendous resources to police the Internet and block anti-government postings and other politically sensitive material with a system known as the “Great Firewall of China.”

“It is necessary to strengthen and improve a mechanism for safeguarding the rights and interests of the people,” Xinhua news agency quoted Hu as saying.

A key to achieve the goal was to “solve prominent problems which might harm the harmony and stability of the society… safeguard people’s rights and interests, promote social justice, and sustain sound social order,” he said.