If those countries, whose national banks got €326 billion from the German Bundesbank, default on their debt, then the German taxpayer has to pay for it all.

We know it is difficult to bankrupt Germany, but the elitists get there, sooner rather than later. 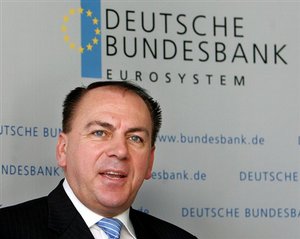 The Federal Bank will finance the rest of the euro area implied a three-digit million sum – and every day there is more money.

Maximum of 250 billion euros may distribute the euro rescue fund to countries in the euro-zone in order to help them escalating national debt. Thus the EU members registered on 9 Established in May 2010. Of which were previously granted only 17.5 billion euros for Ireland. But as it turned out, the German Bundesbank has recently implied in a given volume of grants that provide all European rescue efforts in the shade.

The controversial figure is hiding under the heading “claims within the euro system (net)” in the monthly reports of the Bundesbank. Thereafter, the liabilities that have accumulated the European Central Bank (ECB) and national central banks in the euro area compared to the Bundesbank, have risen by 2010 to 338 billion euros. But the demands of national central banks in euro countries amounted to 326 billion euros. 2006, ie before the outbreak of the financial and debt crisis were the following €-that demands a total of only 18 billion euros.

This unabated increase in the debt of the euro area to the federal bench “makes experts stunned,” said Ifo President Hans-Werner Sinn. “If countries whose banks the loans were given, become insolvent, be liable Germany.” Such liability but was not democratically elected – as by the Bundestag – still decided by the federal government.

Weber had no chance

The Federal Bank shares to be installed on request: “The external assets of the Bundesbank in the financial crisis has risen sharply. An essential role played growing demands within the euro system in the context of the individual payments system target second ”

Target 2 is a system initiated in 2007, designed to offset payment flows between the euro central banks. Today it is the permanent source of funding of other Euro-banks have become. Among them are those countries that are not nearly insolvent or their banks without cheap central bank money can not sufficiently finance. “The decisive factor for this increase was a crisis-induced shift in the cash flows and lending behavior of banks in the euro area,” said the Bundesbank.

The remaining 30 April reigning Bundesbank President Axel Weber, however, had no chance to stop the debt avalanche. Since Target 2 in the establishment was not intended as a financing instrument, now devoid of any limitation.