Islamic fundamentalists attempted a show of force in Tunis on Friday by burning down a street of brothels. 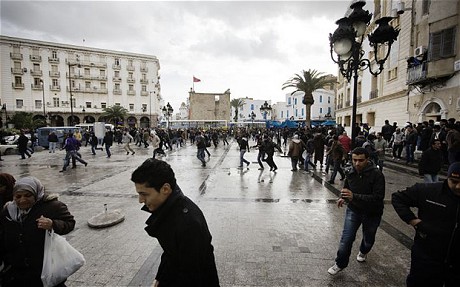 Dozens of Islamists calling for Tunisia’s brothels to be closed had rallied outside the interior ministry following Friday prayers before marching to Abdallah Guech Street Photo: Demotix / Christian Minelli

Dozens of Islamists calling for Tunisia’s brothels to be closed had rallied outside the interior ministry following Friday prayers before marching to Abdallah Guech Street.

At least three people were injured when security forces fired in the air to disperse the crowd.

The incident was the latest sign of Islamists organising in the North African state, the only Arab country with legal prostitution, after an uprising toppled President Zine al-Abidine Ben Ali last month.

“Almost 500 Islamists, many wearing beards, were demonstrating in Old Medina to demand the closure of a brothel,” said Mourad Barhoumi, a Tunis resident who witnessed the demonstration.

“There were several dozen riot police who shut off entry to the neighbourhood. They fired in the air to break up the crowd, which didn’t want to go until the brothel was shut,” he said, adding that three people were injured.

The demonstrators later dispersed after a military official announced that the brothel had been shut, he said.

It was the third brothel shut by the movement in recent weeks.

Tunisia, North Africa’s smallest country, was plunged into turmoil after one man’s self-immolation in a protest against the authorities sparked a revolt that led Ben Ali to flee to Saudi Arabia last month and encouraged a similar revolution in Egypt.

Ben Ali, who took power in 1987, cracked down on the Islamist movement and was seen by many as an oppressive ruler.

Elections to replace him are expected by July or August, and at least one Islamist candidate is expected to run.