Amazon.com:
–Inside Job
– Inside Job [Blu-ray]

Only now does the Guardian report about this documentary. Just in time before the next crisis: The Greatest Depression.

The film Inside Job brilliantly exposes the corruption in US banking that led to the 2008 crash. We ask four bankers for their verdict on this damning indictment of their world 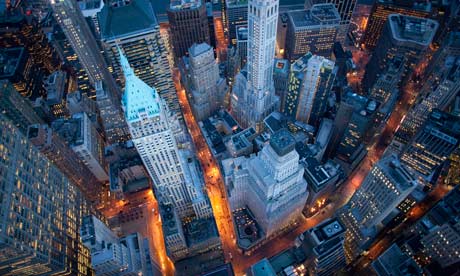 An aerial view of Wall Street, the heart of the global financial meltdown. Photograph: Cameron Davidson

When Michael Moore made his debut feature, Roger and Me, he set about vilifying the boss of General Motors, the now deceased Roger B Smith, for destroying his home town of Flint, Michigan. Charles Ferguson’s film Inside Job attempts to blame a wider cast list for the banking crash of 2008 and explains why so little has been done to reform the financial world or bring criminal prosecutions against the main protagonists.

His villainous lineup includes bankers, politicians (many of whom were previously bankers), regulators, the credit ratings agencies and academics. When Glenn Hubbard, George Bush’s chief economic adviser and dean of Columbia Business School, is shown as a partisan advocate of deregulation, we have one of the movie’s punch-the-air moments. During the interview, Hubbard, who denies he was corrupted by his paid-for relationships with government, angrily barks: “You’ve got five minutes, mister. Give it your best shot.”

The spotlight has largely bypassed academics in the UK. There are plenty of economists who believed the banks understood what they were doing and supported deregulation. Whether they took large slugs of cash for writing poorly researched, cheerleading reports on the economic miracle in Iceland (pre-crash), as former US central banker Frederic Mishkin is found doing, is less clear. Over here, the relationship between academia and business appears to be more arm’s length, though London Business School dean Sir Andrew Likierman sits on the Barclays board, while Howard Davies, who argued for light-touch regulation while head of the Financial Services Authority, has become director of the London School of Economics. The UK’s chief villian, however, is probably the disgraced, but largely unpunished, banker Sir Fred Goodwin, the former boss of Royal Bank of Scotland, once the fifth-largest bank in the world.

In Inside Job, the name that keeps cropping up is Larry Summers, a friend of President Bill Clinton and more recently Barack Obama. Summers exemplifies the links between cheerleaders in academia, Wall Street, supine regulators and an ignorant Capitol Hill that Ferguson stresses were at the root of the problem. It helps that Summers looks like a mafia boss, but the difficulties in making the case against him are shown by the need to explain financial products like credit default swaps and how securitisation was used by banks to increase their borrowing.

Still, no matter how much it is explained, the general public is not going to understand. How does one go into battle yelling slogans about credit default swaps? The bankers know ignorance is their trump card. Maybe Inside Job will make us more savvy in time for the next crash.

“The film’s first half-hour was absolutely dead-on. The explanation of what happened was a chilling re-run of all the events that led up to the financial crisis. It also showed very accurately the denial by everybody inside or outside the industry that such a crisis was even occurring – even up to the last minute before Lehman’s bankruptcy.

I have an issue with some of the elements pursued in the rest of the film. One was the vilification of individual people. Chuck Prince, the CEO of Citigroup at the time of the crisis, may have been overpaid – but I don’t think he was particularly at fault. At worst he perhaps should have known more about what was going on, but really he’s just the nice old geezer at the top who shakes people’s hands at cocktail parties. There may be people lower down who knowingly did criminal things, but that is a different matter.

A weak point was the anti-free market and conspiratorial tone of the film. Yes, deregulation did go too far – particularly with the repeal of the Glass-Steagall Act of 1933, which might have prevented banks gambling with depositors’ money. But to imply that all deregulation in the last 20 years was a conspiracy perpetrated by an academic elite of economists in the pay of the banks is paranoid and absurd.

An oversight by the film was to ignore how risk managers at many banks knowingly failed to voice their fears about the way their companies operated. A risk manager once told me that to raise an issue that undermined the bank’s multi-billion-dollar profits would have been to “sign his own death warrant”. This inability to challenge trading desks generating billions in phantom profits was endemic.

Inside Job clearly catches some of the anti-banker mood, and the public is quite right to be outraged at how banks refinanced at the taxpayers’ expense are paying outsized bonuses. Staff at banks such as RBS should be retained by longer-term incentive schemes such as the one being introduced at Barclays. But, as a free marketeer, I believe banks that have not taken public money should be able to do as they please within the law.”

Ian Hart was a Wall St derivatives trader, before becoming a head-hunter for, among other banks, Lehman Brothers. He now runs Sacred Microdistillery. sacredgin.com

“This was a well-researched film that clearly explained the complexities of the crisis and the greed of bankers. It laid the blame squarely where it belongs – at the feet of bankers, of ratings agencies, of regulators – and it interviewed a lot of heavyweight people, such as Dominique Strauss-Kahn, Eliot Spitzer, Raghuram Rajan and Glenn Hubbard.

It will doubtless make many people – especially those who lost their jobs and savings – angry at not only what the banks did, but that many of the people responsible are still in their jobs, and that no one’s gone to prison. It beggars belief that ordinary taxpayers are facing higher taxes and spending cuts, while bankers walked away scot-free. The film shows that people who had bought a house they couldn’t afford are now living in a tent, whereas bankers have still got their jobs. Consumers enjoyed buying houses that ultimately they couldn’t afford, but mortgages were shoved down their throats without any care on the part of the bankers. In the old days, the bank would say: “We don’t think you can afford that mortgage, so we won’t lend you money.” The film showed how this kind of advice was thrown out of the window.

Unfortunately, it’s clear that for many investment banks business continues pretty much as normal and that another crisis is only a matter of time. Sure, there’s greater scrutiny of bonuses – but many bankers think they were not responsible personally for the crisis and they’re worth every penny they’re paid. Clearly they’re not.

I thought the film also brought out well the “capture” of regulators, politicians and academics who all became cheerleaders for the continued deregulation of finance that began under Ronald Reagan and that culminated in the great crisis. Massive re-regulation is required to ensure that finance is safely locked up in a straitjacket again.

Of particular interest is the dubious role played by academic economists, especially those in the US. Many were paid vast, undeclared sums to produce biased reports saying CDOs and other dodgy derivatives were safe and that Iceland was fine to be gambling with 10 times its annual GDP. The corruption of top US economists and their complete lack of awareness of what they had done was truly shameful.”

“The film was right that banking became synonymous with living the high life, with drug-taking, and basically being above the law. This culture filtered down from the top, and needs to be stopped and questioned a lot more. In Europe, we have tried to since the crisis. Where I work, we are compliant up to our eyeballs – be it drug checks, expenses checks, or simply the monitoring of all phonecalls and emails.

But it was too simplistic for the film to imply that we need more financial regulation. It’s not a black-and-white issue, and you can’t be that kneejerk: the UK is a service-based economy. I would love that to change, but right now, a lot of the GDP comes from people in and around finance. The City itself employs vast numbers of people – not just as bankers, but also on the periphery – and until we move away from that, and find other ways of employing these people, you can’t just shut down an industry. With very harsh regulation, that’s unfortunately what you risk. As a lot of these banks are global and flexible, they can just go overseas. HSBC’s been threatening for years to move its headquarters to Asia. For the UK, that would be a disaster. So I think the government has to tread a fine line between bringing in regulation bit by bit, and regulating all at once.

I’m one of the few women in banking and it’s really obvious watching Inside Job that this is the case. We see the French minister of finance [Christine Lagarde], there’s a woman from the Securities and Exchange Commission – but they’re few and far between. As they say in the film, banking is such an alpha-male society and it’s very hard for women to succeed within it and yet maintain some sense of femininity. If they had more women in banking, I really think there would be more sense of community, and perhaps things such as this crisis wouldn’t happen quite so often, because you wouldn’t have this sense of being part of a boys’ club.”

“Inside Job ignored the enormous level of consumption by ordinary people that drove debt levels so high. The film suggested it was the bankers and the politicians who were driving the collapse – and fair enough, there was some mis-selling of mortgages. But it wasn’t just mortgages: it was bank debt, credit-card debt, car loans. Blame the banker for providing the credit, but the consumer must also take some of the rap. If you talk to a sole trader, they’ll tell you that when times are good, put some money away for when times are bad. But the consumers just spent and spent, and assumed the good times would go on for ever.

Another angle missed by the film was the role of accounting firms. There is a huge amount of blame to be attributed to them. It was their responsibility to monitor the accounts of banks, and when they signed off a bank’s results, they were stating their confidence in the bank’s ability to trade solvently. The film ignored the failure of accountants to say anything. It talked about regulators and ratings agencies. But the accountancy firms are just as big as some of the larger banks and not to analyse their role in the crisis was a huge omission.

The film was very much in the style of Michael Moore – they’d clipped and edited the interviews to twist slightly what was said in them – but it was also very watchable, succinct and very good at simplifying a chain of events. And the accusation that the worlds of academia and politics were complicit in the crisis was completely valid. There is a lot of cronyism out there, and people who criticised regulation did end up in the Obama government. There’s a gentleman’s club, and they all look after each other.”

Interviews by Patrick Kingsley. The interviewees above wished to remain anonymous.