And don’t buy any kind of ‘paper’, only physical silver (or gold) is real these days, everything else is an illusion. 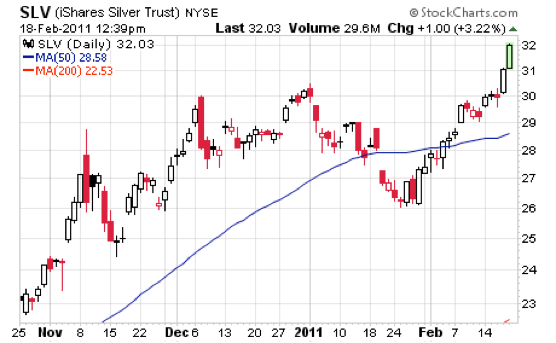 With silver closing at multi-decade highs and gold approaching $1,400, the Godfather of newsletter writers Richard Russell in his latest commentary stated, “The Dollar remains weak. As a store of value, the dollar has failed. This is the dreaded secret that the Wall Street Journal will not even mention. Instead, they prefer to bad-mouth gold. Throughout 5,000 years of history, gold has served as an effective store of value. No fiat currency has survived as long as 100 years.”

“The Dollar remains weak. As a store of value, the dollar has failed. This is the dreaded secret that the Wall Street Journal will not even mention. Instead, they prefer to bad-mouth gold. Throughout 5,000 years of history, gold has served as an effective store of value. No fiat currency has survived as long as 100 years.

I wrote before that the silver miners have re-started their hedge books for silver at around 29-30 dollar silver. This means that they thought silver was “high enough,” and they were selling their silver forward, because they thought that silver was as high as it was going to go. In effect, the mines were short their own product. As for the mines — big mistake. Rising silver is either wiping out their profits or actually costing them.

The underwater short position has become a nightmare and there seems to be no escape that does not involve tremendous pain.