Gaddafi certainly has no problem with peaceful demonstrations that will topple his regime:

TRIPOLI, Feb 13 (Reuters) – Palestinian refugees should capitalise on the wave of popular revolts in the Middle East by massing peacefully on the borders of Israel until it gives in to their demands, Libyan leader Muammar Gaddafi said on Sunday. 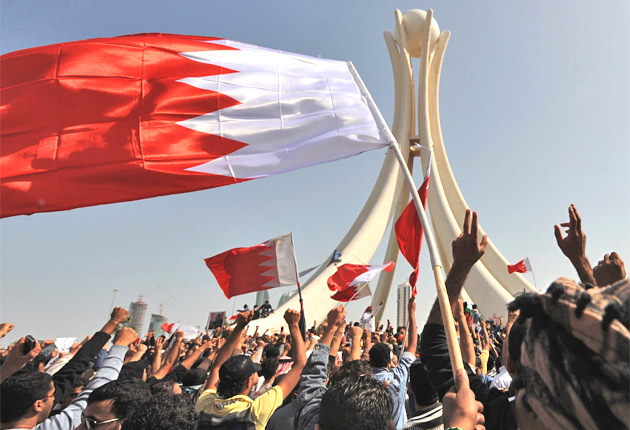 Clashes between protesters and security forces left dozens of people injured in Libya yesterday, as the upheavals which led to the overthrow of regimes in Tunisia and Egypt continued to spread across the region.

The tiny gulf state of Bahrain was hit by a third day of protests as thousands gathered for the funeral of a demonstrator killed by the security forces, while police in Yemen flooded the streets to try to quell nearly a week of anti-government unrest, sparking fresh clashes that left one protester dead.

Meanwhile, the US and Israel were on stand-by last night after claims by the right-wing Israeli Foreign Minister, Avigdor Lieberman, that two Iranian warships were stationed in the Red Sea and poised to enter the Suez Canal.

It coincided with clashes in Iraq, where around 55 people were thought to be injured after protesters attacked government offices in Kut, ripping up pavement stones to hurl at regional headquarters and setting trailers ablaze.

In Benghazi, Libya’s second-largest city, demonstrators chanting “Allah il Allah” and “Allah shall triumph over unbelievers” threw petrol bombs and set cars alight in a sign of the increasingly religious fervour of the rare marches against the regime of Colonel Muammar Gaddafi, the Arab world’s longest-serving leader.

The rallies followed the arrest of a human rights campaigner, Fethi Tarbel, which acted as a trigger for opposition groups to take to the streets.

The authorities appeared to have been taken by surprise at the rapid escalation of the unrest, while groups of young people used Facebook to try to organise a “day of rage” for today.

The violence overnight in Benghazi, 600 miles east of the capital, Tripoli, left around 40 people injured, said Abdelkarim Gubaili, director of the city’s General Hospital. Most of them were members of the security forces, he said, who were unprepared for the level of violence they had faced.

Around 600 demonstrators had marched to the local government headquarters in Sabri district and attempted to get inside the building. Scuffles turned to running battles when security forces attempted to intervene.

Residents said a semblance of normality had returned to the city by yesterday afternoon. Shops, businesses and some bank branches reopened. Fazal al-Manisi, who had shut down his furniture business, said: “We had a night of bad trouble. They were shouting, saying Allah is against corruption and all those responsible should be in prison.”

In an effort to counter the protests, Libyan television yesterday showed footage of pro-government rallies in Tripoli and Benghazi with supporters holding portraits of Colonel Gaddafi and chanting: “We sacrifice our blood and souls for you, our leader.” The regime also released 110 prisoners belonging to the banned Libyan Islamic Fighting Group. It was the largest release in recent times by the regime, which had carried out a ruthless campaign against fundamentalist groups in the country.

Elsewhere in the region, a funeral procession in Bahrain for the second demonstrator killed by security forces mushroomed into a rally against the government. Many mourners joined 2,000 other protesters encamped at a junction in the capital, Manama, with signs saying “This is Our Tahrir Square” and vowing to replicate the events in Egypt, where President Hosni Mubarak was ousted by protests on Friday.

The government has expressed regret over the deaths of the two protesters, both Shias, but there is increasing concern in the West over the rising protests in the kingdom, which is striving to be a financial centre to rival Dubai and is of strategic significance to the US as the base of the Navy’s Fifth Fleet.

Efforts to suppress protests in Yemen, meanwhile, led to clashes and the death of one person in the southern port town of Aden, where about 500 people turned on police who had tried to disperse the crowd by firing in the air and deploying tear gas. Yemen has been gripped by six days of protests against the president of 32 years.

The longest serving leader in the Arab world, Colonel Muammar Gaddafi, has ruled Libya since seizing power in a bloodless coup in 1969.

Trouble first flared last month in several cities over a lack of subsidised housing. After weeks of calm, police and anti-government protesters again clashed this week in Benghazi.

On the surface, Libya seems ripe for revolt with an authoritarian government, high unemployment and a young population, but is somewhat protected by its vast oil wealth. Libyans enjoy state support and many sympathise with Gaddafi’s stance towards the West.

US ally President Ali Abdullah Saleh has been the ruler of the Arab world’s most impoverished nation for 32 years.

The protests started last month inspired by the Tunisian uprising. A group calling itself the February 24 Movement has vowed to remain on the streets until the regime is toppled. A demonstrator was shot and killed in the port city of Aden yesterday during clashes with police.

Saleh has failed to defuse protester anger despite saying he will not run for another term in 2013 and that his son, Ahmed, would not succeed him. His government is weak with little control beyond the capital and is dependent on alliances with powerful tribes.

A tiny oil-producing island off the coast of Saudi Arabia, Bahrain has an elected parliament. With its relatively older population and its liberal policies it might seem an unlikely candidate for revolt. But clashes with security forces this week left two people dead.

Bahrain suffers from deep-rooted sectarian tensions, with the majority Shia Muslim population complaining that they are discriminated against by the Sunni royal family, which has ruled since 1783. Unemployment is rising.

The protesters are demanding greater power for the elected parliament and a loosening of the royal dynasty’s grip. The government may have to make serious concessions to the enraged Shia population to weather the storm.

Mahmoud Ahmadinejad won a second term as President in 2009 in an election the opposition claim was rigged. He is the second most powerful man behind Supreme Leader, Ayatollah Ali Khamenei.

After the leadership welcomed the revolt in Egypt, the opposition seized the opportunity and called a rally in support of the other Arab nations. One person was killed and dozens injured by security forces.

The Arab uprisings appear to have given fresh impetus to the Iranian opposition. The opposition last held a major protest in December 2009 which was brutally suppressed. But would people be prepared to go on to the streets in large numbers again?

A caretaker government has been in charge of the country since the dictator Zine El Abidine Ben Ali fled the country on 14 January after the protests that inspired other uprisings.

The protests grew after a market seller set himself alight in December after he lost his licence to trade. The result: the Jasmine Revolution.

A state of emergency remains in place. People have returned to work, but many police have disappeared and strikes and protests continue. Elections are due to be held this year.