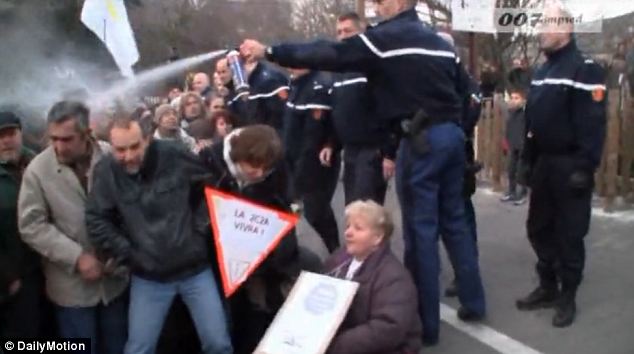 Sudden: One of the gendarmes pulls out a can of tear gas and sprays it into the faces of the mostly middle-aged protesters 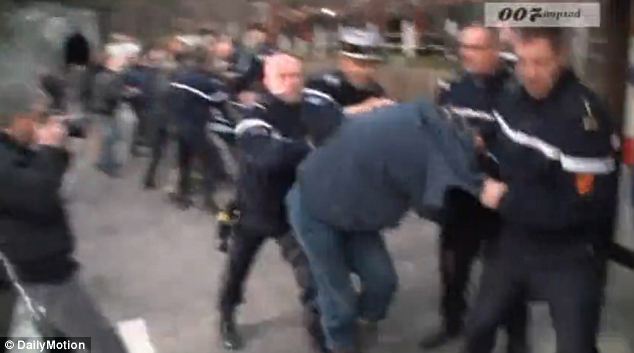 Investigation: Protesters were then manhandled by police at the steam train in Anduze, Languedoc

A French policeman sprays tear gas directly into the face of peaceful protesters in video footage which has caused outrage across the country.

Filmed in the tourist town of Anduze, in the Languedoc region, the recording shows officers breaking up a demonstration against the scrapping of a steam train service.

The good humoured crowd laugh and joke while trying to block a locomotive, at one point even shaking hands with a senior policeman.

But then he takes out a can of spray, points is directly into the face of one of the demonstrators, and then presses the button.

A tear gas ‘bomb’ is then thrown into the middle of the group of largely middle-aged and elderly protestors, which includes grandmothers.

One protester said: ‘We were taken completely by surprise. The police said we could have five minutes to clear the railway track, and appeared very friendly.

‘Then they began to act like complete thugs – spraying us in the face and hitting us if we resisted.

‘Most of the people involved in the demonstration were retired members of the local community. None of them had ever been involved in any trouble.’

Alain Beaud, socialist president of the town council, said: ‘I think it will be necessary to punish the commander of the gendarmes who used the tear gas.

A video of the attack has been posted on numerous websites in France, attracting some 500,000 views by today.
Commentators said it reinforced the image of French police being some of the most brutal in Europe, especially with crowd control.

The country has a notorious reputation for the use of tear gas.

The country offered to export the gas – which causes severe respiratory problems as well as damage to the eyes and skin – to Tunisia during last month’s unrest.

A spokesman for the Gendarmerie in Anduze said an investigation into the video, which was shot on January 21, was ongoing.