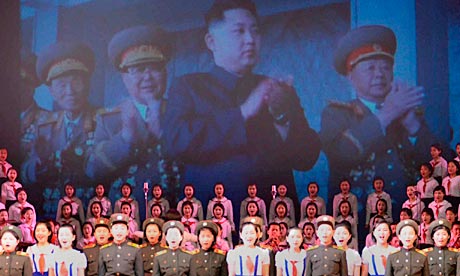 A North Korean man has walked across the heavily mined border into South Korea, a rare defection as his fellow citizens prepared to put on choreographed celebrations for Kim Jong-il’s birthday.

Military and spy agency officials could not explain how the man managed to walk across the 4km (2.5 mile) wide minefield and past North Korean guards.

He was being interrogated after being picked up by South Korean guards, an official said.

The demilitarised zone border, which has divided the Korean peninsula since the end of the 1950-53 conflict, is rarely crossed, except through two corridors cleared for passage by officials and civilians after relations warmed in 2000.

Hundreds of North Koreans flee the impoverished country each year across its northern border with China. Most of them then make their way overland to the South, with more than 20,000 having found refuge in the wealthy capitalist neighbour. Most cite economic hardship and political persecution as the main reasons for leaving home.

While defections are cause for deep embarrassment for the North Korean authorities, the country’s masses never hear or read about them through the state-controlled media.

The news came as North Koreans celebrated the country’s biggest holiday, marking the 69th birthday of Kim Jong-il, the isolated state’s reclusive and ailing Dear Leader, who is trying to smooth the path for a third generation of family rule.

Kim’s youngest son Jong-un is being groomed to succeed him, and was last year appointed to senior military and political posts, along with Kim’s sister and husband.

Staged festivities are scheduled throughout the week, including exhibitions of Kimjongilia, a hybrid flower named after the leader, as well as ice-skating, acrobatics and musical shows.

“The venues of the events are pervaded with deep trust in Kim Jong-il who has led the Korean revolution only to victory, true to the will of President Kim Il-sung,” KCNA reported, referring to his father and the state’s founder.

In the South, politicians released balloons with anti-Pyongyang messages across the border, while in the capital, Seoul, protesters burnt posters of Kim Jong-il and his son.