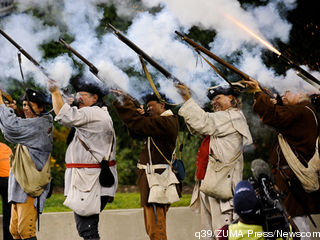 A Montana Republican has introduced a bill that would create a volunteer armed militia called a “home guard,” that would answer directly to the governor or local sheriffs during emergencies.

State Rep. Wendy Warburton (R) introduced House Bill 278, which she said was “just about local volunteers being prepared in case of emergency to support the National Guard, support the sheriff, support the governor as needed,” the Associated Press reports.

The governor would be required to “recruit, mobilize, administer, train, discipline, equip, and supply the organized militia,” which the AP estimates would cost the state $45,000 a year.

Nick Wing of the Huffington Post points out that the original bill referred to the groups as “militias,” but Warburton since changed the language to call them the more neutral “home guards.”

The bill describes how the forces would be divided into companies, and then platoons and squads. Each company would have a “company flag, company creed, company colors,” as well as a uniform with the company insignia.

Last month another Montana Republican introduced a bill to give local sheriffs supremacy in their counties, and requiring “that federal employees shall obtain the county sheriff’s permission to arrest, search, and seize.”