Vladimir Putin has had a lavish £600 million Italianate palace built for himself near a Black Sea resort with the proceeds of “corruption, bribery and theft”, a Russian businessman has alleged. 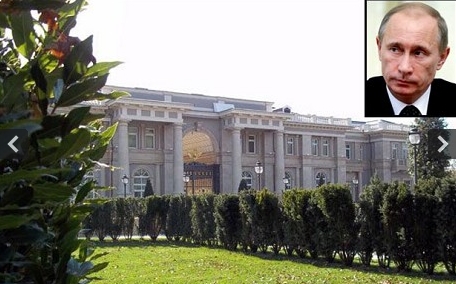 Set in 74 hectares of prime land near the Black Sea coast, the palace is reported to be almost eight million square feet  Photo: AFP/GETTY

The claim, made in a letter to Dmitry Medvedev, Russia’s president, was boosted on Monday after the Novaya Gazeta newspaper obtained what it said was an authenticated copy of the original contract for the palace signed in 2005 by Vladimir Kozhin, the Russian presidential property manager. Mr Putin, now prime minister, was president at the time.

Set in 74 hectares of prime land near the Black Sea coast with its own vineyard, the palace is reported to be almost eight million square feet and has its own helipad. Other features include an indoor cinema, a summer amphitheatre, a casino, swimming pools, a gym and a clock tower. Sergei Kolesnikov, the businessman who claims the palace is Mr Putin’s, has likened the structure to a palace built for Russia’s Tsars outside St Petersburg. He said that the Russian prime minister had personally approved the design and materials.

Mr Kolesnikov has called on President Medvedev to investigate his controversial claim. “A palace is being built on the Black Sea coast for the personal use of the Russian prime minister,” Mr Kolesnikov wrote in his original letter. “As things stand, the cost of the palace is $1 billion. The funds were mostly raised through a combination of corruption, bribery and theft,” he said. It was in President Medvedev’s powers, he added, to show ordinary Russians that everyone was equal before the law including Mr Putin. Mr Putin’s spokesman has dismissed the allegation out of hand however, as has Mr Kozhin, the Kremlin official whose signature allegedly appeared on the original contract. President Medvedev has not responded to the allegations either, at least not publicly.

But Mr Kolesnikov, who said he was involved in the project himself until 2009 when he was removed for raising concerns about corruption, is sticking to his story and pictures of the lavish residence have appeared on a Russian whistle-blowing web site. Mr Kolesnikov said that a state construction company was being used to build the palace and that state funds had been illegally diverted to the project.

“Corrupt officials building themselves personal palaces at a time when children are dying due to lack of funds for medicines is Russia’s shame,” he wrote. A Russian magazine, Kommersant Dengi, reported last month that Mr Putin and Mr Medvedev share between them at least two dozen palaces, villas and mansions. In his official income declaration last year, Mr Putin said he earned the equivalent of around £80,000. Mr Putin may contest a presidential election which is due next year. His supporters believe the claim about the palace has more to do with politics and may be part of a dirty tricks campaign against him.