The Germans will regret this deal very soon.

German company will acquire Big Board, but exchange is already mostly symbolic 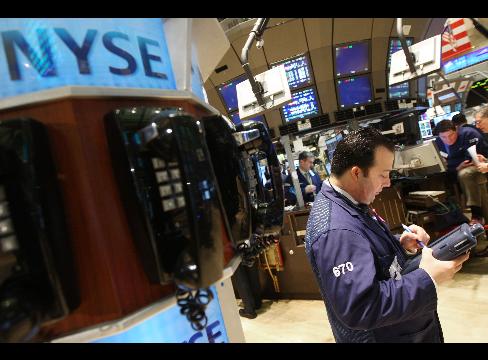 NEW YORK (AP) — Why would anyone want to sell a centerpiece of capitalism like the New York Stock Exchange? Because despite its fame and its fabled floor, it’s a lousy way to make money.

A German company will acquire the Big Board in a deal that creates the world’s largest exchange operator but does not stop the decades-long evolution of stock trading from shouting floor brokers to the cold, quiet hum of computers.

There was no immediate word on what changes might come to the corner of Wall and Broad streets, the Corinthian-columned building synonymous with global finance, including what the new company would be named.

Sen. Charles Schumer, D-N.Y., called for NYSE to be first in the exchange’s new name. The German company, Deutsche Boerse, will control 60 percent of the new company’s board of directors.

The exchange’s importance in the complex web of the stock market is already largely symbolic.

Most trading now takes place on computers that can match thousands of orders a second. On some days, the floor of the exchange is one of the loneliest places you could find yourself in a city of 8 million people. The floor of Deutsche Boerse’s exchange in Frankfurt has even fewer live traders. It now stands empty except for a small group milling in front of computer screens.

Just like selling shoes or airline tickets, the profitability of providing a venue for the exchange of stocks is a victim of technology. Facilitating the trading of actual stocks makes up a small and decreasing part of NYSE Euronext’s revenue. The exchange makes more money from selling complex financial contracts, market data to companies like Google and Yahoo that offer stock quotes, and the fees companies pay to be listed on the exchange.

Overall, NYSE Euronext’s profit last quarter was $135 million, down more than 20 percent from a year earlier. Its stock has lost 44 percent of its value in the past three years.

The New York exchange dates to 1792, when 24 brokers and merchants gathered to trade stocks under a buttonwood tree on Wall Street. Ten years from now, it’s not hard to imagine the floor of the NYSE, and its familiar perch where executives ring the closing bell, as nothing more than a high-priced venue for weddings and business receptions.

By merging with Deutsche Boerse, NYSE Euronext hopes at least to hold off less lustrous rivals that have undercut its fees and move further from the low-margin stock trading business. NYSE Euronext makes only three-hundredths of a penny for every order of 100 stocks, says Richard Repetto, an analyst at Sandler O’Neill in New York.

“In the U.S. and Europe, regulatory rules have allowed anyone to launch a trading platform and compete with the NYSE,” he says. “You have all these competitors who are fighting over the price, and the result is that it’s become a commodity.”

Daily trading volumes show just how far “Wall Street” has grown beyond Wall Street. The average number of shares traded each day on the NYSE floor has fallen by a third over the past three years. Many orders are instead routed through one of more than a dozen computerized exchanges scattered across the nation, each competing for transactions by offering faster execution.

In this system, the fact that a company is listed on the New York Stock Exchange has little relevance because its shares trade on digital exchanges housed in, say, a warehouse in New Jersey or an office park in Kansas City. Large investment firms may also trade shares on private “dark pools” that allow big mutual funds to buy or sell stock without affecting its price or alerting others to the size of their order.

“The exchange business is really a computer business these days,” says Charles Jones, a professor at Columbia Business School and a former visiting economist at the New York Stock Exchange. “You can really save money on the I.T. side by having a common platform. This merger is really about the cost side of things.”

The new combined company will have a bigger footprint in the more lucrative market for derivatives and futures contracts, the exotic financial instruments that allow an investor to buy the option to purchase something at a fixed price in the future. Hedge funds and other sophisticated investors buy futures contracts to place bets on commodities like oil prices or to provide a form of insurance in case an investment doesn’t work out.

Futures contracts sell less frequently than stocks, making the market for them less competitive. Fees charged on these transactions are less likely to fall victim to competition because each exchange owns its clearinghouse. Clearinghouses settle each trader’s account each day and ensure that all contracts are fulfilled, an essential part of the market structure that is difficult for a rival to undercut.

Deutsche Boerse is a large part of the European futures business. The acquisition, which will leave investors in the German company with a 60 percent ownership stake in the new entity, will give the company ownership of stock exchanges in Lisbon, Paris, Amsterdam, Brussels, New York and Frankfurt.

The parent companies of the Chicago Mercantile Exchange and the Nasdaq are down 40 percent and 33 percent after dividends, respectively, over the last three years. The Standard & Poor’s 500 index is up 6 percent over the same time, including dividends.

The acquisition comes at a time when other stock exchanges are combining. Last week, the London Stock Exchange and the parent company of the Toronto Stock Exchange announced a $2.9 billion merger.

Stock trading by way of individual brokers is becoming a relic in many ways. Many hedge funds and institutions now trade using sophisticated computer programs that are thought to make up about 70 percent of each day’s total volume. Known as high-frequency trading, these programs allow institutions to own a stock for less than 60 seconds at a time and sometimes without a human operator knowing what the computer has bought.

The NYSE, meanwhile, has lost some of its luster. Fewer private companies undertake the rigorous process of getting their shares listed on the Big Board. Institutions, private equity firms and venture capitalists in Silicon Valley have taken over from public shareholders as financiers. Facebook, for instance, is now thought to be worth more than $50 billion. The company’s shares trade on private exchanges.

Investors who own companies that are listed on the NYSE probably won’t notice changes from the acquisition. The exchange will still be bound by U.S. securities laws and, to a certain extent, tradition. Companies and celebrities will probably still clamor to ring the opening bell on the floor of the exchange, if for nothing else than the media exposure.

The acquisition still needs approval from American and European regulators. The deal will likely go through in the U.S. because NYSE Euronext is not merging with another American company like Nasdaq OMX Group, a combination that could run afoul of antitrust laws, analysts say.

Experts say German ownership of the New York Stock Exchange is something that will not matter to most lay investors.

“The question is should we be angry that foreigners are buying our stock exchange? The answer is not really,” said Roy Smith, a professor at New York University and a former partner at Goldman Sachs. “Financial markets are fully globalized and that’s a good thing because that makes them more efficient.”