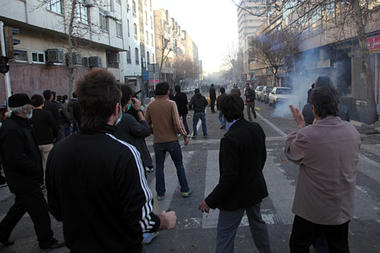 Members of the Iranian parliament shout slogans in Tehran yesterday

Conservative Iranian parliamentarians yesterday called for the country’s main opposition leaders to be put to death after protests in Tehran in solidarity with the revolt in Egypt.

About 50 marched through the central hall of parliament waving their fists and chanting: “Death to Mousavi, Karroubi and Khatami.”

Police had blocked the roads leading to the houses of Mir Hussain Mousavi and Mehdi Karroubi, who had disputed the re-election of President Mahmoud Ahmadinejad, when they attempted to join the marches.

The former president Mohammed Khatami had incurred the anger of the theocratic faction for proposing reforms. According to one opposition MP, two demonstrators died in clashes with security forces in Tehran. There were also reports of marches in Isfahan, Mashhad and Shiraz.

The show of support for the theocratic state was followed by a statement issued by 221 MPs stating: “We believe the people have lost their patience and demand capital punishment”.

William Hague, the Foreign Secretary, accused the Iranian regime of “shameful hypocrisy” in praising the protests in Cairo while suppressing similar discontent at home.

The US Secretary of State, Hillary Clinton, stated the protesters “deserve to have the same rights that they saw being played out in Egypt and are part of their own birthright”.

Iran’s foreign ministry spokesman, Ramin Mehmanparast, claimed the comments amounted to “meddling” in Iranian affairs. The Shia Tehran regime had welcomed the upheavals in Sunni Tunisia and Egypt as “Islamic awakening” while describing home-grown opposition in the streets as “political moves.”

Tehran’s police chief, Ahmad Reza Radan, blamed opposition leaders for instigating the protests. He also accused the US, Britain and Israel of stoking the protests. “They are behind the disturbances” he said. “They are falsely saying this is like Tunisia and Egypt.”

Iran has already tried scores of opposition figures and activists on charges of fomenting the mass protests following the country’s disputed 2009 presidential elections that saw Mr Ahmadinejad win a second term. More than 80 of people were sentenced to prison terms ranging from six months to 15 years.