Switzerland has the lowest crime rate in the world:

– Why Switzerland Has The Lowest Crime Rate In The World

The New World Order really wants to disarm all citizens around the world, …

… BUT in Switzerland the people are still allowed to vote and they obviously use their brains. 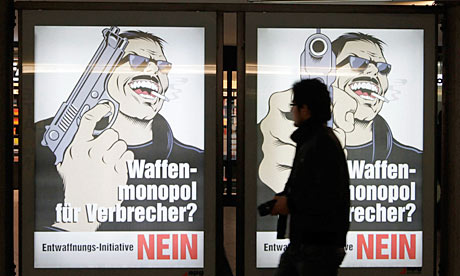 Activists in Switzerland’s gun law reform referendum used graphic images in their campaign, for instance this one for the No campaign which says, “Firearms monopoly for criminals? No.” Photograph: Peter Klaunzer/EPA

Swiss voters have rejected a proposal to tighten the country’s relaxed gun laws.

With final official results yet to be released, a majority in at least 18 of Switzerland’s 26 cantons voted against the proposal to ban army rifles from homes and impose new requirements for buying other guns.

The proposal would have ended the Swiss tradition of men keeping their army rifles at home – even after completing their military service. Supporters of the reform argued this would have reduced incidents of domestic violence and Switzerland’s high rate of firearms suicide.

“This is an important sign of confidence in our soldiers,” said Pius Segmueller, a lawmaker with the Christian People’s party and former commander of the Vatican’s Swiss Guard.

The government had argued that existing laws were sufficient to ensure some 2.3m weapons in a country of fewer than 8 million people are not misused.

Opposition against the proposal was strongest in rural and German-speaking parts of the country, which tend to be more conservative and where shooting clubs are popular.

French-speaking cantons in western Switzerland backed the plan, but women and young people – who according to opinion polls favour more restrictive gun laws – failed to turn out in sufficient numbers.

“Women in Switzerland have only had the vote for 40 years, and yet they aren’t engaging in politics, even when the issue concerns them,” said Martine Brunschwig-Graf, a national lawmaker with the left-of-centre Social Democratic party.

Doctors, churches and women’s groups launched a campaign four years ago to force ex-soldiers to store their military-issued firearms in secure army depots. They also want the Swiss government to establish a national gun registry and ban the sale of fully automatic weapons and pump action rifles.

Gun enthusiasts say limiting the right to bear arms would have destroyed a cherished tradition and undermined the citizen army’s preparedness against possible invasion by hostile neighbours.

Dora Andres, president of the Swiss Sport Shooting Association, told the Associated Press this week that the measure would have killed off many of Switzerland’s 3,000 gun clubs, which she said are a pillar of community life in many villages.

About a quarter of Switzerland’s 1,300 suicides each year involved a gun, according to federal statistics. The exact number of military-issued weapons involved is disputed, but those calling for tighter rules claim they account for between 100 and 200 suicides a year, mostly among men.

Advocates for tighter gun control noted that since Switzerland cut the size of its army in 2004, the number of firearms suicides among men aged 30-40 has been halved.

Swiss referendums require a majority of both votes and cantons to pass.