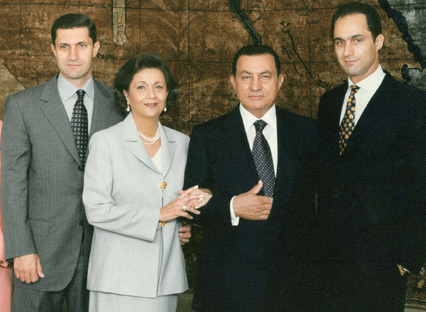 – Hosni Mubarak in Coma? (The Voice of Russia):

Former Egyptian President Hosni Mubarak is in grave condition. Information about this appeared in several Egyptian and Arab media outlets. According to the newspaper “Al-Masri al-Yaum”, Mubarak is in a coma. The publication refers to a well-informed source close to the ex-president.

In addition, some details regarding the preparation of Mubarak’s last address to the nation have been leaked to the press, saying that the speech was repeatedly rewritten by his son Gamal and during the recording itself Mubarak lost consciousness several times.

Cairo has not provided any official information on the state of Mubarak’s health.

Mubarak and his family moved to Sharm al-Sheikh on Thursday night following his final speech, in which he handed over executive authority to former Vice-President Omar Suleiman, Egypt’s al-Masry al-Youm reported.

The same sources said that Mubarak was currently receiving medical treatment but that no decision had yet been made on whether to transfer the 82-year-old former head-of-state to a hospital.

Rumors had circulated earlier that Mubarak had fainted twice while recording his final speech, which was broadcast on state television on Thursday evening.

Prime Minister Ahmed Shafiq confirmed Sunday that Mubarak was in Sharm el-Sheikh and has not leave the country.

Mubarak underwent a successful surgery in March 2010 at a German clinic for an inflamed gall bladder. Since then, doubts increased over the former president’s health.

Hosni Mubarak and his family have moved a large part of their assets – guesstimated at between $20 and $70 billion – from European banks to Saudi Arabia and the United Arab Republics against personal guarantees from King Abdullah and Sheik Al Nahyan to block access to outside parties.This is reported by Gulf and West European sources. Tunisian ex-ruler Zein Al Abdain Ben Ali received the same guarantee when he fled his country and received asylum in the oil kingdom.

A Swiss financial source commented: “If he had any real money in Zurich, it may be gone by now.”
According to debkafile’s sources, the transfers took place on Feb. 12-13. Although a weekend when European banks are closed, high-ranking officials in Riyadh had their managers hauled out of home to execute Mubarak’s transfer orders without delay.
The ousted Egyptian ruler was on the phone to Saudi King Abdullah Friday, Feb. 11, immediately after his vice president Omar Suleiman went on state television to announce his resignation and handover of rule to the army. Mubarak called it a military putsch conducted under pressure from Washington. He denied he had resigned or passed any powers to the army. “I had no idea Omar Suleiman was about to read out that statement. I would never have signed it or allowed it to be published,” said Mubarak.
The Saudi king voiced understanding for the ex-president’s plight and said the Riyadh government was under orders to meet any requests for assistance received from him.

Mubarak views himself still as the rightful president of Egypt. Aware of this, the High Military Council Sunday, Feb. 13, abolished the constitution. Otherwise, Mubarak would have been correct and the military would have had no authority to issue decrees and pass laws without his signature.

The military junta’s Western sympathizers were quick to read in the military statement a pledge to call an election in six months. This was not exactly stated. The military council announced that the incumbent (Mubarak-appointed) cabinet would stay in office “for six months or until elections.”
Elections cannot be held until a new a new constitution is enacted because the old one has been abolished leaving a void which is filled by martial law and no clear obligation for an election date.
One major obstacle confronting orderly transition to civilian rule is the opposition’s clamor for an all-inclusive investigation of corruption within the Mubarak family and its ruling circle. As one of the opposition leaders George Ishak put it:  “We will research everything, all of them: the families of the ministers, the family of the president, everyone.”
Prof. Samer Soliman, of the American University in Cairo said: “The corruption of the Mubarak family was not stealing from the budget; it was transforming political capital into private capital.”
debkafile’s military sources stress that all 25 generals serving in the High Army Council can be relied on to raise a high wall against any such probe. Members of Egypt’s high officer class are heavily invested in Egyptian industry, financial institutions and banks, having built their personal fortunes by the same methods as the Mubarak clan and its hangers-on.

An exhaustive investigation might also bring to light American and Israel capital interests linked to businesses close to the Mubarak regime. The military will not doubt use its powers under martial law to put a spoke in the opposition’s demand for an inquiry.