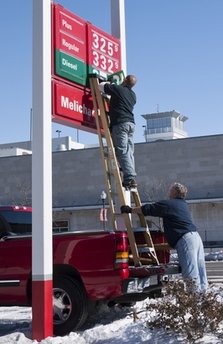 A gas station in Lincoln, Neb.

NEW YORK – U.S. gasoline prices have jumped to the highest levels ever for the middle of February. The national average hit $3.127 per gallon on Friday, about 50 cents above a year ago.

The price is about 6 percent higher than on this date in 2008. The next day, pump prices began a string of 32 gains over 34 days. They rose 39 percent over five months, eventually hitting an all-time high of $4.11 per gallon in July.

Although gas prices are expected to rise, most experts aren’t expecting a reprise of 2008, when the price spike forced many drivers to join car pools and trade in gas-guzzling SUVs for fuel-efficient cars.

“It would be a mistake to think we’re going to have that all over again,” said OPIS chief oil analyst Tom Kloza.

He says oil demand will slide in the U.S. by May, as refineries slow fuel production while they switch to summer blends of gas. World oil consumption also may not rise as much as expected.

And Kloza contends that oil traders are more cautious now, after getting burned when oil plunged to $33 per barrel in early 2009, just six months after hitting $147 per barrel. Even the most bullish traders no longer think they can chase commodity prices higher without risk, he says.

Still, Kloza expects gas to reach $3.50 to $3.75 per gallon this spring because of the usual run-up in prices ahead of the summer driving season. That would mean an increase of 12 to 20 percent from the current level.

Gasoline climbed almost 10 percent since November as oil prices rose because of factors including stronger demand from China, a frigid winter in the U.S. and tension in Egypt, Kloza said.

The price of Brent crude, a key oil contract that also influences U.S. gasoline prices, hit $100 per barrel in January for the first time since 2008.

“It was a perfect storm,” said Kloza.

Benchmark West Texas Intermediate crude for March delivery fell $1.15 to settle at $85.58 a barrel on the New York Mercantile Exchange. That’s lower than the price on Jan. 25, when the demonstrations in Egypt began.

Investors have been concerned that the anti-government protests over the past 18 days could spread to other parts of the Middle East and disrupt oil supplies. Now that Mubarak has stepped down, the military says it will oversee a democratic transition to a new government.

“The market is getting whipsawed,” oil analyst Stephen Schork said. “Everyone is playing the card that stability in Egypt is good for oil” shipments.

In London, Brent crude fell 50 cents to settle at $100.94 a barrel on the ICE Futures Exchange.