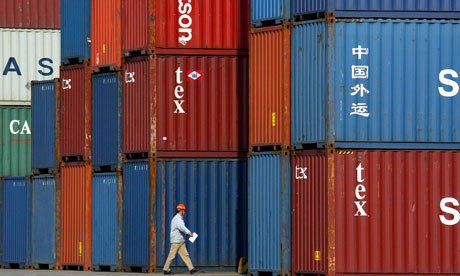 Chinese containers ready for shipping. China notched up another chunky trade surplus with the US. Photograph: Aly Song/REUTERS

The US trade deficit with China has hit a record high, fuelling tensions between the countries over currency imbalances.

The gap between US imports from China and what it sold to the country rose to $273.1bn (£170bn) last year, the largest trade imbalance the US has ever recorded with a single country. While US exports to China grew by a third last year to an all-time high of $91.9bn, imports worth $364.9bn travelled in the other direction, an increase of 23.1%.

Some US politicians blame Beijing for the size of the trade gap between the nations, claiming it is unfairly keeping the yuan’s value too low. On Thursday a bipartisan group in Congress proposed a bill that would allow the US to impose emergency tariffs against China if its currency was found to be undervalued.

China, though, has long denied that it is responsible for American exports lagging so far behind its imports.

The overall US trade deficit jumped by a third during 2010 to $497.8bn as the US economy recovered following the trauma of the financial crisis. This is the largest annual percentage rise since 2000. The rising cost of oil was a key driver in pushing up the total cost of imports. In December, the US trade deficit widened by 5.9% to $40.6bn, the commerce department reported.

Economists warned the US deficit was likely to keep growing in 2011, although manufacturers may benefit from a weaker dollar. “Exports remain strong and are a bright spot in the US expansion,” said Cary Leahey, at Decision Economics.