Hundreds of women will take to the streets of Italy’s cities today calling on scandal hit Premier Silvio Berlusconi to resign after prosecutors requested he be sent to trial for having sex with an underage prostitute. 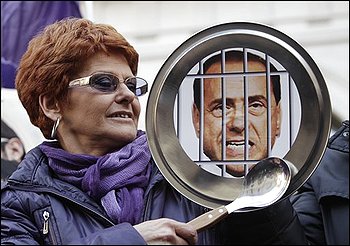 A protester bang pots and pans as they take part in a demonstration calling for the resignation of Italian Prime Minister Berlusconi on Saturday. Photo: REUTERS

Protesters say evidence leaked from the probe into Berlusconi, 74, allegedly paying for sex with then 17 year Moroccan belly dancer Karima El Mahroug, and show he has little respect for female dignity.

Wiretaps leaked from more than 600 pages of the prosecution file suggest he surrounded himself at parties at his home with starlets and other women hoping to use their looks to gain positions in politics or within his Mediaset TV empire.

Protests are scheduled to take place in 200 cities and towns across Italy as well as London and New York, with the largest due to be held in Rome and Milan and counter demonstrations by activists from Berlusconi’s People of Freedom party area also planned.

Organisers have called the protest ”If Not Now, When?” which is also the title of a famous novel by the Italian award winning writer Primo Levi and which tells the story a group of Jewish partisans behind German lines during World War II as they seek to continue their fight against the occupier and survive.

Iaia Caputo, of the organising committee, said: ”The Ruby case has revealed a system of political selection based on an exchange of sex and power.

”If we accept this as normal, we risk prejudicing the free choice of women.

”We want to send a message to the country and to the parties that do not see themselves a part of what has happened over the last few weeks – it’s possible to change route”.

Men have also been encouraged to attend the rallies and prostitutes and nuns have also said they will attend to voice their anger and disgust at Berlusconi’s alleged lewd behaviour.

For almost a month now billionaire media tycoon Berlusconi has been in the spotlight over claims of stripping nurses and policewomen at his infamous ”bunga bunga” parties.

The phrase is said to refer to a crude after dinner sex game and Berlusconi has insisted that the regular parties he held at his mansion at Arcore near Milan were nothing more than convivial social events.

Following a tense meeting with Italian president Giorgio Napolitano about the scandal the respected daily Corriere Della Sera published a cartoon of the two men on its front page.

It showed Berlusconi telling the president: ”Bunga bunga is a perfectly innocent game – if you like I can show you”, which is greeted with a look of surprise from Napolitano.

The scandal seems to have had little effect on Berlusconi’s popularity with just a 5% drop in his approval ratings and polls show that if an immediate general election were held he would win.

He has plenty of supporters in Italy who agree with him, including many women, and they plan demonstrations in support of him outside the prosecutor’s office in Milan.

In a reference to his numerous battles with the Italian judiciary they plan to hold placards reading:”Hundred trials, no convictions equals persecution”, and ”Palace of Injustice”.

They claim his privacy has been violated by the investigation and are urging him to ”resist, resist, resist” as one supporter who was interviewed on Italian TV put it.

They are also urging women to show their support by going to pro Berlusconi rallies or not attending the demonstrations against him – popular Italian pop star Anna Tatangelo said she would not be taking part.

She said: ”I don’t think the protest will help the climate in Italy. It’s necessary to calm things down and restore order in the political situation and the basic things that concern our country. Don’t go and protest, think about how we can really get back up”.

Preliminary hearings judge Cristina Di Censo is not expected to announce before Monday or Tuesday whether she has granted the prosecution request to send the case to trial and if approved it could start as early as April. 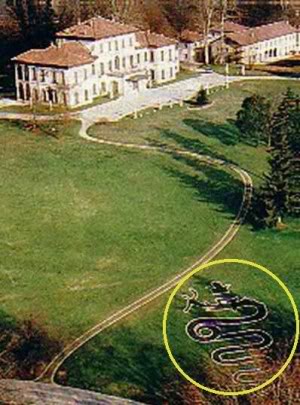