Scientists in Iceland are warning that another volcano looks set to erupt and threatening to spew-out a pall of dust that would dwarf last year’s event. 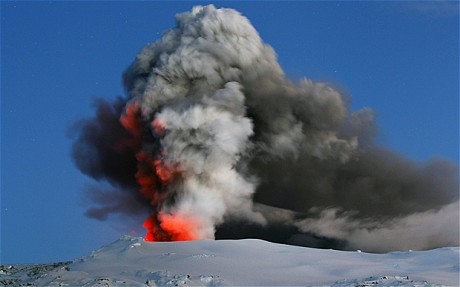 Lava and ash explode out of the caldera of Iceland’s Eyjafjallajokull volcano Photo: REUTERS

Geologists detected the high risk of a new eruption after evaluating an increased swarm of earthquakes around the island’s second largest volcano.

Pall Einarsson, a professor of geophysics at the University of Iceland, says the area around Bárdarbunga is showing signs of increased activity, which provides “good reason to worry”.

He told the country’s national TV station that a low number of seismometer measuring devices in the area is making it more difficult to determine the scale and likely outcome of the current shifts.

But he said there was “every reason to worry” as the sustained earthquake tremors to the north east of the remote volcano range are the strongest recorded in recent times and there was “no doubt” the lava was rising.

The geologist complained that the lack of coverage from measuring devices means he cannot accurately detect the depth and exact location of the increased number of localised earth movements.

“This is the most active area of the country if we look at the whole country together,” he told the Icelandic TV News. “There is no doubt that lava there is slowly growing, and the seismicity of the last few days is a sign of it.

“We need better measurements because it is difficult to determine the depth of earthquakes because it is in the middle of the country and much of the area is covered with glaciers.”

Respected volcano watcher Jón Frímann, said on his volcano watch blog: “After the Eyjafjallajökull volcano eruption in the year 2010 it seems that geologists in Iceland take earthquake swarms more seriously then they did before.”

He explained the Icelandic Met Office had on Sunday warned of the increased risk of a eruption in north-west side of Vatnajökull glacier due to the high earthquake activity in the area, and added: “It is clear that only time is going to tell us if there is going to be a eruption in this area soon or not.”

The last recorded eruption of Bárdarbunga was in 1910, although volcanologists believe its last major eruption occurred in 1477 when it produced a large ash and pumice fallout. It also produced the largest known lava flow during the past 10,000 years on earth.

It is the second largest volcano on Iceland and is directly above the mantle plume of molten rock.

By comparison, Bárdarbunga dwarves the Eyjafjallajökull volcano, which shutdown most of Europe’s airspace last year after its ash cloud drifted across the continent’s skies