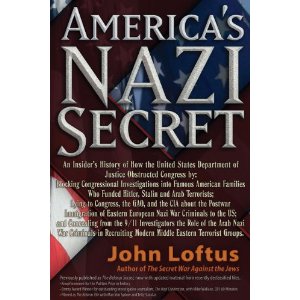 Fully revised and expanded, this stirring account reveals how the U.S. government permitted the illegal entry of Nazis into North America in the years following World War II. This extraordinary investigation exposes the secret section of the State Department that began, starting in 1948 and unbeknownst to Congress and the public until recently, to hire members of the puppet wartime government of Belarus—a region of the Soviet Union occupied by Nazi Germany. A former Justice Department investigator uncovered this stunning story in the files of several government agencies, and it is now available with a chapter previously banned from release by authorities and a foreword and afterword with recently declassified materials.

John Loftus is a former U.S. government prosecutor, a former Army intelligence officer, and the author of numerous books, including The Belarus Secret; The Secret War Against the Jews; Unholy Trinity: How the Vatican’s Nazi Networks Betrayed Western Intelligence to the Soviets; and Unholy Trinity: The Vatican, the Nazis, and the Swiss Banks. He has appeared regularly as a media commentator on ABC National Radio and Fox News. He lives in St. Petersburg,  Florida.