– Former Chairman of the Princeton Economic Institute Martin Armstrong: The Egypt Crisis Will Engulf The Arab World, And Then Spread To Europe 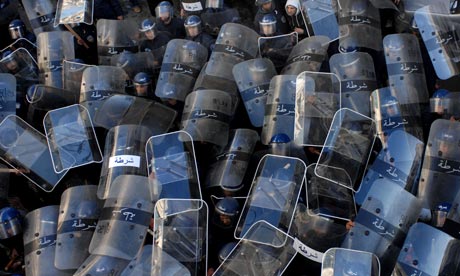 Algeria protests Riot police use their shields during a demonstration in Algiers last month. Photograph: AP

Algeria, the oil-rich, military-dominated north African state, braced itself for a day of pro-democracy protestson Saturday, despite a ban on demonstrations in the capital, Algiers, and a large security presence intent on containing any uprising inspired by Egypt or Tunisia.

A key energy exporter and the biggest country in the Maghreb, Algeria used its powerful armed forces last month to contain several days of rioting, triggered by price rises for sugar and cooking oil. At least five people died and around 800 were injured in demonstrations against youth unemployment, poor housing and corruption, including several people who set themselves alight.

Now a hastily formed umbrella group of civil associations, independent trade unionists and small political parties has called for a national day of protest on Saturday , under the slogan “Changing the system”. It is calling for an end to 12 years of authoritarian rule by Abdelaziz Bouteflika and his generals.

In an effort to stop mass protests, Bouteflika said he would use the country’s vast oil and gas wealth to lower the prices of key foods. He also promised to allow more democratic freedoms, create jobs and lift a 19-year-old state of emergency that still hangs over the country.

Despite weeks of strikes, including by academics and paramedics, Algeria has not seen the spontaneous, mass uprisings of Tunisia or Egypt. Analysts say people want change but are wary of chaos in a country still traumatised by its violent recent past. More than a million were killed in the fight for independence from France in 1962, while up to 200,000 died during the civil war of the 1990s after elections were scrapped in 1992.

As an important exporter of oil and gas, Algeria has around $150bn (£93bn) in foreign currency reserves, almost no external debt, and forecasts economic growth of 4% in 2011. But the energy wealth has not translated into improvements in people’s standard of living. The unmodernised economy and a clunking bureaucracy create too few jobs for a country of 35.5 million, where almost half of the population is under 25. Youth unemployment is thought to be over 35%, with a steady flow of desperate young people trying to escape the country on makeshift rafts.

“Algeria needs a revolution, not just the lifting of the state of emergency,” said Hocine Zehouane, chairman of the Algerian League for Human Rights, one of the groups behind the marches.

Mansouria Mokhefi, Maghreb analyst at the French Institute of International Relations, said: “I don’t think the Algeria situation will pop in the same way as Tunisia. There isn’t the spontaneity of protest. The Algerians live under a dictatorship, but their case is different. It’s a much richer country, able to redistribute those riches to relieve some of the worries, frustration and misery.

“Also, the army is much stronger. In Algeria, the army is all-powerful, holding the reins of power, both political and economic. The army has a long experience of repression and they didn’t hold back during the protests in January.”

She added: “Psychologically, Tunisians were behind an iron curtain, living in fear and terror and with no means of expression: once they took to the street, there was a complete feeling they had had enough.

“Algeria is still very traumatised by 10 years of civil war. They are able to express themselves more or less freely, they can criticise the government and denounce scandals in the press. Since the food prices went down, there has been a kind of calm.”

1 thought on “Algeria Prepares For Day of Protests – Is Algeria Next?”