Look how those sheeple cheer at Dick Cheney, who personally gave the order for NORAD to stand down on 9/11!

Some Americans obviously love to be screwed, raped and pillaged by traitors.

– Donald Rumsfeld to Receive ‘Defender of the Constitution Award’ at CPAC 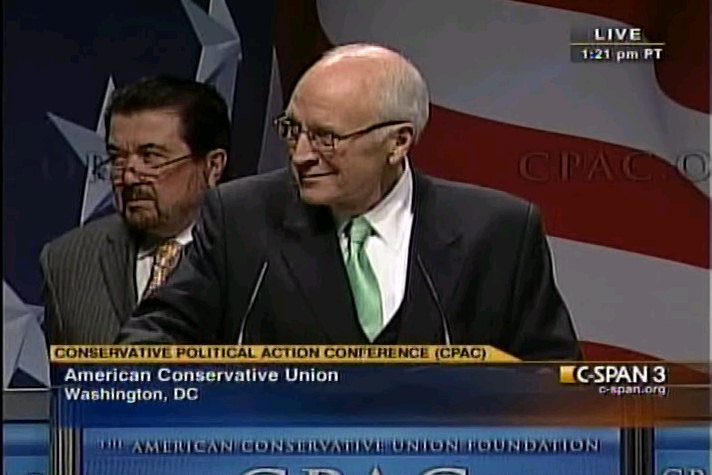 Supporters of libertarian Republican Ron Paul shouted down former Vice President Dick Cheney at a conservative conference Thursday, in a sign of a growing foreign policy rift on the American right.

Cheney had appeared on the first day of the 2011 Conservative Political Action Conference to introduce Donald Rumsfeld, the former Bush-era defense secretary who was scheduled to receive this year’s “Defender of the Constitution Award.”

That didn’t sit well with “Team Paul,” supporters of Rep. Ron Paul who have long called for an end to the US’s foreign wars.

“Where’s bin Laden?” one heckler shouted as Cheney stood at the podium to introduce Rumsfeld.

“War criminal!” another shouted out, prompting a heated reaction from the crowd.

The specter of a Republican vice president being called a “war criminal” at a conservative conference was so unexpected that it prompted TalkingPointsMemo’s Evan McMorris-Santoro to describe it as “what a Cheney-Rumsfeld hug at the Netroots Nation convention might look like.”

“Uh, Defender of the Constitution?” activist Justin Bradfield told McMorris-Santoro. “Let’s see: he expanded the Defense Department more than pretty much any other defense secretary and he enforced the Patriot Act.”

Reporting from the Washington, DC, event, McMorris-Santoro estimated that the number of libertarian Paul supporters had grown from previous years, an assertion backed by Bradfield, who suggested that “half” the attendees were libertarians like himself.

Rumsfeld’s “Defender of the Constitution” award has been ridiculed by liberal anti-war activists and libertarians alike, who argue that Rumsfeld and other Bush administration officials were among the most dismissive of constitutional rights.

In 2005, he was sued by the American Civil Liberties Union for authorizing the torture and abuse of detainees at facilities in Iraq and Afghanistan. The ACLU claimed that the Constitution prohibited the Secretary of Defense from adopting or permitting policies of cruelty against civilians in US military custody, but Rumsfeld claimed he could not be held legally liable for the torture. The case was eventually dismissed.

Rumsfeld recently released his memoir, in which he said his biggest regret was not stepping down after the Abu Ghraib prisoner abuse scandal. He said he should have forced then president George W. Bush to accept his resignation over the revelations of abuse by US military guards at the Abu Ghraib prison in Iraq.

Rumsfeld ended up staying in office for another two-and-a-half years until Bush sacked him following a Republican defeat in 2006 legislative elections in which the unpopular Iraq war played a major role.

— With earlier reporting by Eric W. Dolan and a report from AFP