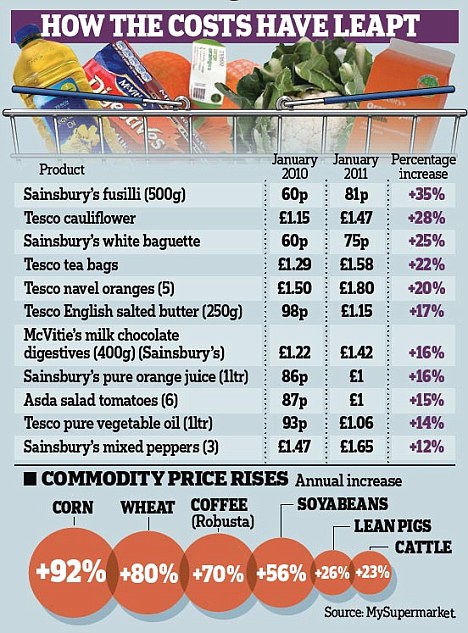 The prices of a range of basic foods surged at the start of the year, showing the biggest monthly rise in more than five years.

Bread, pasta, and packets and tins of food increased in cost by 2.7 per cent between December and January to reach an annual rate of 6.3 per cent, according to the British Retail Consortium.

Overall, the annual rate of food inflation jumped from 4 per cent to 4.6 per cent, despite claims of supermarkets to be waging a new year price war. This was the largest monthly increase in two years.

The BRC claims its supermarket members are protecting shoppers against the worst effects of global commodity price rises. However, the trade body warned of ‘severe pressure’ that is likely to bring even bigger increases in the months ahead.

Research by price comparison website MySupermarket.co.uk shows a 35 per cent annual rise in the price of own-label pasta and 25 per cent on a baguette.

A pack of McVitie’s milk chocolate digestives was up 16 per cent, and a litre of vegetable oil by 14 per cent.

The commodity price of corn is up 92 per cent in a year, while wheat is 80 per cent dearer and coffee 70 per cent more expensive.

Higher grain prices have a knock-on effect on the cost of meat and dairy products because large quantities are used as animal feed.

The shop price report said: ‘The rise in food inflation is being driven by surging food commodities in global markets.

‘According to the United Nations, global food prices hit a record high last month, surpassing the levels seen in the 2007-08 food crisis.

‘Pressure on vital food commodities has come on the back of continued strong demand from emerging economies and poor harvests from major exporting countries such as Russia, the U.S., Australia and Argentina.

‘The surge in commodity prices is working its way through the supply chain to wholesalers and is now beginning to materialise in shop prices.’

The BRC said the overall rate of shop price inflation, combining food and non-food items, rose from 2.1 per cent in December to 2.5 per cent in January.

It added that the increase in VAT last month had been offset by heavy discounting in the sales.

‘But, with a range of other cost pressures also squeezing margins, retailers will struggle to go on absorbing it.’