– Spain to rescue its banks (Remember that Spain itself is ‘too big to bail out.’)

EU officials have been told to buy gold. Guess why? 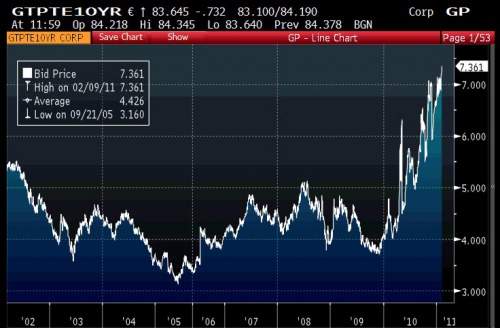 With all the discussion over how “stable” Europe is in the past month, one might actually take the European bankercrats’ word at face value. And nothing could be more hazardous to one’s health than believing a corpulent gentleman from Brussels. Because while Herman Van Rompuy is literally sending out haikus via twitter, his continent continues to burn.

Today, the Portuguese 10 year hit a fresh lifetime high yield (and low price for those who failed bond math 101). One would think that with virtually everything backstopped by the ECB, Europe would show at least some resiliency.

No such luck. In fact, things are getting progressively worse as Germany continues to procrastinate on the one decision that has any hope of being at least a stop-gap interim solution, namely a united bond issuance authority. Instead, Europe continues to go all in on its failed EFSF contraption which will work for a few months, and then will have to be bailed out with an even bigger CDO: an EFSF3?

The only question around this time is who is indicating (wink) that they are long the equity tranche? As for Portugal’s completely non-viable interest rate: just close your eyes and stick your hand in the sand. Trust Bernanke- it works for him (and he is a Ph.D.).