Japan’s outstanding debt and fiscal deficit “are not sustainable”, the IMF warned on Wednesday, adding that Tokyo must tackle the issues if it wants to avoid future trouble. 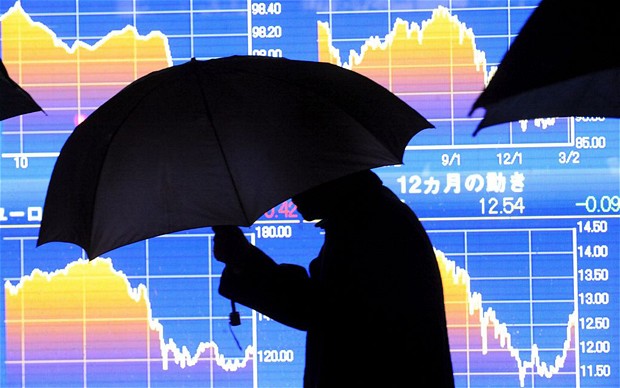 Unable to weather the storm? Last month Standard & Poor’s cut Japan’s credit rating one notch to “AA-” from “AA”, saying the government lacked a “coherent strategy” in efforts to ease the highest debt proportional to GDP of any developed nation. Photo: EPA

The comments by IMF deputy managing director Naoyuki Shinohara come weeks after Standard & Poor’s lowered the country’s credit rating and accused the government of not having a clear plan to ease the debt mountain.

“If you look at Japan’s outstanding debts and fiscal deficits, I think they are not sustainable over the medium- and long-term,” Shinohara told reporters on the sidelines of a seminar in Tokyo.

“If (Japan) leaves the fiscal situation as it is, it could leave the source of trouble for the future,” he said.

“It is important to make a national consensus at the earliest possible time and form a concrete agreement on how to achieve fiscal rehabilitation.”

He added, however that “we don’t think serious problems will occur imminently,” citing Japan’s huge pool of savings.

Last month Standard & Poor’s cut Japan’s credit rating one notch to “AA-” from “AA”, saying the government lacked a “coherent strategy” in efforts to ease the highest debt proportional to GDP of any developed nation.

A rapidly ageing population, entrenched deflation and a feeble economy have made it hard for lawmakers to curb borrowing, with years of pump priming creating a debt load that is well on course to exceed 200 percent of GDP.

Nearly a third of government spending is being swallowed up by a social security system catering to a rapidly greying society, Standard & Poor’s warned, with that ratio set to rise without reforms as Japan continues to age.

Prime Minister Naoto Kan’s centre-left government has prioritised social security reform and an overhaul of the tax system, but the opposition has so far refused to begin talks over the issue.

The government has been able to fund its growing fiscal gap by raising money in the domestic market and its ability to do so is seen as sustainable for now, with banks and pension schemes holding around 95 percent of the debt.

But analysts warn pressures will increase as the population ages and dips into savings to spend in retirement.

On the Japanese yen, which continues to hover close to 15-year highs against the dollar, Shinohara said: “We maintain the view that the current yen rates are roughly in a range consistent with (Japan’s) medium-term fundamentals.”

The yen’s rise has prompted calls from exporters for the government to do more to weaken a currency whose strength makes their products less competitive against rivals such as South Korea, while eroding profits.

But with a large trade and current account surplus, Japan has a relatively weak case to lower its currency to boost exports, some analysts argue.

Shinohara also warned that Japanese banks may need to further increase capital buffers against risks such as a possible economic slowdown from European debt problems and bursting of a Chinese property boom.