Perpetrators falsely claim weather or insects destroyed their crops and cash in on a government-backed insurance program. Some don’t bother planting at all. Others sell their harvests in secret. 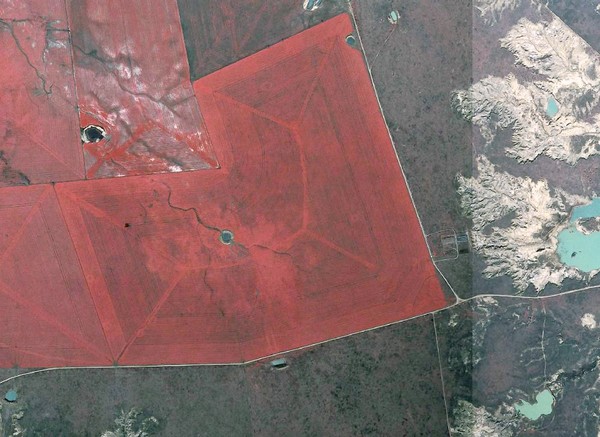 A satellite image of fields, showing plant density. The federal government has been using satellites, data-mining and other tools to look for fraud. (U.S. Department of Agriculture / January 9, 2006)

Reporting from Sacramento — The federal investigator took the witness stand and described the crime scene: a sprawling field clogged with boulders, native grasses and knee-high sagebrush.

The defendant, a California farmer, had said the site was a 200-acre wheat field. But the investigator found no tilled soil, no tractors, no plows. In fact, she testified, she found no wheat.

The field was just a field — and a prime example, federal prosecutors allege, of a wave of agricultural insurance scams sprouting across the nation.

Get the monthly that has L.A. talking. Subscribe to Los Angeles Times Magazine at a special introductory rate.

Such crimes are being perpetrated by farmers who fraudulently claim that weather or insects destroyed their crops to cash in on a government-backed insurance program. Some cheats never bother planting at all. Others sell their harvests in secret and then file claims for losses, collecting twice for the same crop.

One North Carolina tomato grower, armed with a camera and a party-size bag of ice cubes, created a mock hailstorm in his fields and swindled the federal government out of $9.2 million.

These growers — along with crooked insurance agents and claims adjusters — are using the program to bilk insurance firms and the U.S. government out of millions of dollars a year, according to prosecutors, industry officials and high-tech experts who review questionable claims for the U.S. Department of Agriculture.

Taxpayers are on the hook for many of those losses.

The federal government has been fighting back against such criminals, using satellite technology, advanced data-mining techniques and other tools to spot fraud. The penalties, too, have grown stiffer. These efforts have saved taxpayers at least $730 million over the last decade, by some estimates.

Critics, however, say that such high-tech oversight catches only the most egregious cases, and that insurance companies have little incentive to be more aggressive lest they lose lucrative federal subsidies to sell crop policies.

“Politically, it makes sense not to care too much, because otherwise the insurance companies get hauled up to Washington and read the riot act for not using taxpayer money efficiently to help out the poor farmer,” said Bruce Babcock, director of the Center for Agricultural and Rural Development at Iowa State University.

The vast majority of U.S. farmers follow the rules, insurers and federal officials said. Bert Little, director of the data-mining group Center for Agribusiness Excellence, said that less than one-half of 1% of the farmers who take part in the program cheat the system.

“But that less than 1% represents a pretty big chunk of money, between $100 million to $200 million a year,” said Little, whose Texas group is contracted by the federal government to analyze farm records in search of fraud clues.

By its very nature, farming is risky. The federal government created the Federal Crop Insurance Corp. and, in 1938, started selling policies to farmers to help them recover from the Great Depression. By the 1980s, the government was subsidizing farmer premiums to encourage participation, and Congress had voted to expand the program and turn it into a public-private partnership.

Washington handed over the selling and servicing of these rural policies to a tight-knit group of insurance companies, with some lucrative incentives. Lawmakers agreed the U.S. Treasury would still guarantee the riskiest policies. The government would also pay agents’ commissions, cover some of the insurers’ operating costs and continue to subsidize farmers’ annual premiums. Today, taxpayers cover about 60% of these premiums.

The program ballooned, thanks to insurance industry lobbying and federal rules that make it tough for farmers to go without coverage. Although the amount of acreage covered remained relatively stable, the value of insured crops climbed to $78 billion in 2010 from $36.7 billion in 2001. Premiums, tied to the volatility of the commodity futures market, jumped in price. Agents’ commissions, which are tied to crop prices and premiums, have tripled over the last decade.

The trouble, critics say, is that private insurers and their agents reap most of the benefits while the public still picks up the losses.

In 2009, taxpayers shelled out nearly $4 billion to the 16 insurers involved in the program, according to the USDA’s Risk Management Agency, which administers the program. Of that, $1.5 billion was paid in commissions to an estimated 15,000 insurance agents. Because there were more gains than losses, the USDA said it retained $1.4 billion, some of which came from farmers’ premiums.