She just stated the obvious.

She just pressed the big red button in front of her, now look at the reaction. 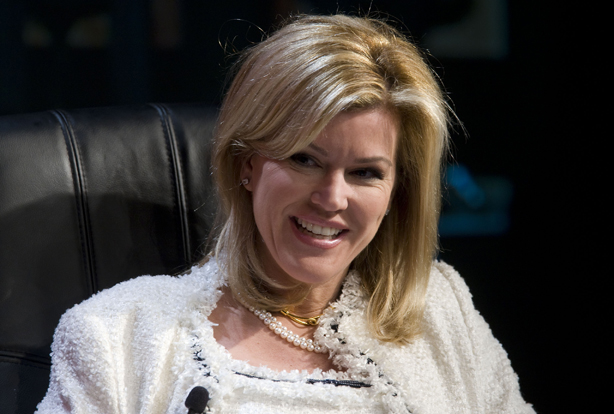 Meredith Whitney has done it again, turning Wall Street against her with a contrarian call, this time on municipal bonds.

The analyst’s prediction for “50 to 100 sizable defaults” of U.S. municipal bonds totaling “hundreds of billions of dollars” could become her Big Wrong Call. If so, it will knock Whitney from a pedestal, to the satisfaction of her many critics.

She has staked her credibility on this forecast, broadcast Dec. 20 in an interview on CBS’s “60 Minutes.” Her summary of a 600-page report to clients prompted a National League of Cities analyst to say she possessed a “stunning lack of understanding.” Other critics called her prediction “ludicrous,” “irresponsible,” “damaging,” and “overreaching.”

There’s a huge gap between these descriptions and Whitney’s track record as an analyst. The chasm is so big that it is worth exploring. Something interesting is going unexamined or unexplained.

Many of Whitney’s critics have a vested interest in tearing her down. They include competing municipal bond analysts, fund managers who run muni portfolios, financial advisers who sell the tax-exempt securities, and above all, the borrowers who depend on munis to finance their whopping deficits. To all of them she is a big-mouthed, larger-than-life nightmare.

It doesn’t help that her big calls have been bearish, which automatically pits her against the established interests of Wall Street. Critics also question whether Whitney’s a perma-bear who is paid to go to extremes — in effect, the flipside of the rating companies that were perma-bulls on mortgage-backed securities before the financial crisis.

There has been a fair debate over whether Whitney’s correct and negative call on Citigroup, which gave her credibility, also made her overconfident and created a monster desperate for attention. By extending her franchise beyond banks, Whitney has fed the monster argument.

If she were demure and understated instead of a brassy hustler who markets herself on television with stunning success, fewer people might be hoping for Whitney’s fall. But she’s willing to break a sweat to boost her business and sell herself as a brand. That doesn’t make her a phony.

My eyes roll every time an article mentions her professional wrestler husband and his colorful aliases, usually with the innuendo that she’s putting on a similar (that is, inauthentic) show.

New York magazine, in a March 2009 story, pointed out that for its interview, Whitney “dressed in a tightly fitted plum velvet jacket and towering red patent-leather heels.” The article goes on to report her “squeals” about receiving a gift-box of cookies. Fortunately, the magazine didn’t speculate about her bra size.

It’s easier to understand Whitney when you study her provenance. I knew her in the mid-1990s at Oppenheimer & Co. when she was a wide-eyed research assistant to analyst Steve Eisman, now of FrontPoint Partners and one of the main figures in Michael Lewis’s bestseller, “The Big Short.”

Back in those days he was a firebrand who terrorized consumer finance companies. Eisman was the first, if not the only analyst to call them out for trying to outrace a tide of loan-losses through massive growth in lending. His style was to assume the role of town crier, revel in the controversy he created, and take the flak as he waited for the targets of his crusade to crash and burn, as he knew they would do.

It’s a template that has worked multiple times in the past two decades to predict the fate of business models built on the false notion that high growth can overcome bad economics. (See: Enron, Countrywide, Washington Mutual and AIG.)

Those who were early to grasp the single most important business dynamic of our era — the Ponzification of America — turned what is an unfurling disaster for our country into a money-maker for investors. Eisman taught Whitney, and they were both early.

Whitney’s latest call on municipal defaults is the logical extension of this theme. Her point is that, until now, investors were getting paid too little for the risk they were taking by investing in local municipal bonds. She isn’t the first to note troubles in the muni market, just the most aggressive and unequivocal in her point of view. That willingness to be gutsy, along with the work that went into the 600-page report, “Tragedy of the Commons,” is what finally put this issue in the news.

Whitney has been tripped up over unfortunate arguments about whether defaults will number fewer than 50 or more than 100, what is meant by the term default, and whether hundreds of billions of dollars in defaulted debt is a lot or a little.

Her critics have argued that the federal government will wave its wand and do another bailout, or some legal abracadabra may let municipalities avoid technical bankruptcy. These are beside the point of what Whitney’s trying to say: that the risk premium for local municipal bonds was seriously out of whack.

The question isn’t how much municipal bond investors will get back in interest payments and principal, but how much the securities were overpriced compared with safer assets. All Whitney has to do is endure the flak until we find out. She is one tough lady, and I suspect can handle that.

Alice Schroeder, author of “The Snowball: Warren Buffett and the Business of Life” and a former managing director at Morgan Stanley, is a Bloomberg News columnist. The opinions expressed are her own.)