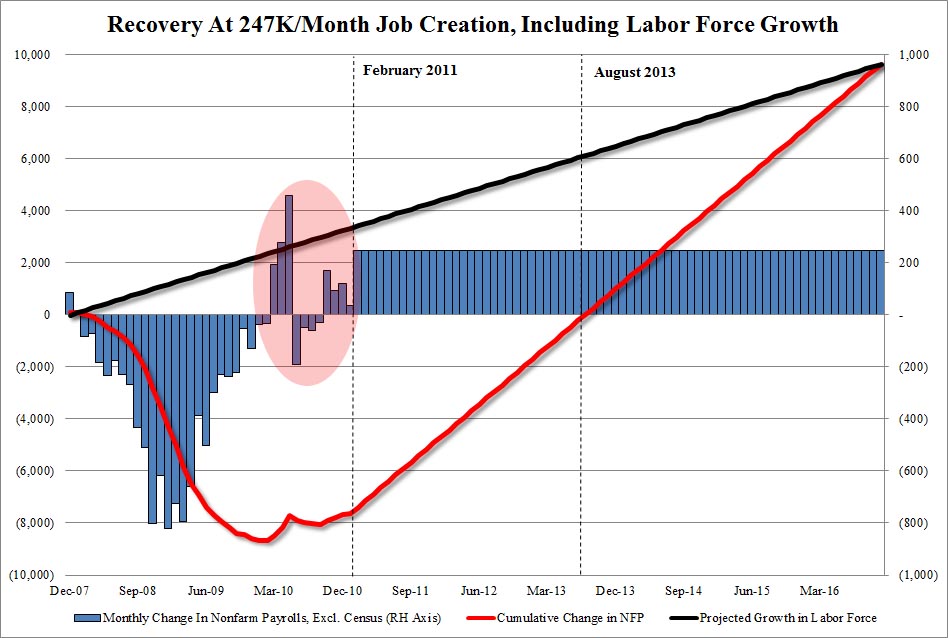 Every time we revise the attached chart, its looks worse and worse.

The first time we did an analysis of how many jobs per month the US has to generate each month to get back to the same payroll number as of November 2007, right before the start of the Greater Depression, and when accounting for the 90K/month natural growth to the labor force, something the administration continues to blissfully ignore (with the labor participation rate plunging to a 26 year low) it was in the mid 220s.

As of today, the number is almost quarter of a million, or 246,600. That is how many jobs the US has to generate every single month until November 2016, or the end of Obama’s improbable second turn, for the unemployment rate to get back to where it was when accounting for population growth.

And while this is obviously impossible, one other thing that is concerning is that post the revised NFP numbers, not only do we now get a lower cumulative low of all jobs lost, at just over 8.6 million attained in February 2010, but as the highlighted area demonstrates, the recent trend in jobs is one of accelerating deterioration.

If in the offchance it were to, gasp, snow in February, March will likely have the first negative NFP print since September. Oh yes, post today’s revisions, we now learn that the months June through September actually lost jobs (granted, inclusive of census adjustments). One thing is certain: 5% unemployment will not be back for the next 5 years. 100% guaranteed.