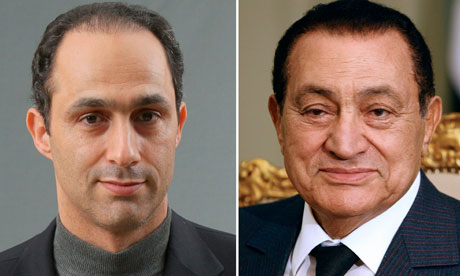 Gamal and Hosni Mubarak are reported to have built up huge fortunes, including properties in London. Photograph: Cris Bouroncle/AFP/Getty Images

President Hosni Mubarak’s family fortune could be as much as $70bn (£43.5bn) according to analysis by Middle East experts, with much of his wealth in British and Swiss banks or tied up in real estate in London, New York, Los Angeles and along expensive tracts of the Red Sea coast.

After 30 years as president and many more as a senior military official, Mubarak has had access to investment deals that have generated hundreds of millions of pounds in profits. Most of those gains have been taken offshore and deposited in secret bank accounts or invested in upmarket homes and hotels.

According to a report last year in the Arabic newspaper Al Khabar, Mubarak has properties in Manhattan and exclusive Beverly Hills addresses on Rodeo Drive.

His sons, Gamal and Alaa, are also billionaires. A protest outside Gamal’s ostentatious home at 28 Wilton Place in Belgravia, central London, highlighted the family’s appetite for western trophy assets.

Amaney Jamal, a political science professor at Princeton University, said the estimate of $40bn-70bn was comparable with the vast wealth of leaders in other Gulf countries.

“The business ventures from his military and government service accumulated to his personal wealth,” she told ABC news. “There was a lot of corruption in this regime and stifling of public resources for personal gain.

“This is the pattern of other Middle Eastern dictators so their wealth will not be taken during a transition. These leaders plan on this.”

Al Khabar said it understood the Mubaraks kept much of their wealth offshore in the Swiss bank UBS and the Bank of Scotland, part of Lloyds Banking Group, although this information could be at least 10 years old.

There are only sketchy details of exactly where the Mubaraks have generated their wealth and its final destination.

Christopher Davidson, professor of Middle East politics at Durham University, said Mubarak, his wife, Suzanne, and two sons were able to accumulate wealth through a number of business partnerships with foreign investors and companies, dating back to when he was in the military and in a position to benefit from corporate corruption.

He said most Gulf states required foreigners give a local business partner a 51% stake in start-up ventures. In Egypt, the figure is commonly nearer 20%, but still gives politicians and close allies in the military a source of huge profits with no initial outlay and little risk.

“Almost every project needs a sponsor and Mubarak was well-placed to take advantage of any deals on offer,” he said.

“Much of his money is in Swiss bank accounts and London property. These are the favourites of Middle Eastern leaders and there is no reason to think Mubarak is any different. Gamal’s Wilton Place home is likely to be the tip of the iceberg.”

Al Khabar named a series of major western companies that, partnered with the Mubarak family, generated an estimated $15m a year in profits.

Aladdin Elaasar, author of The Last Pharaoh: Mubarak and the Uncertain Future of Egypt in the Obama Age, said the Mubaraks own several residences in Egypt, some inherited from previous presidents and the monarchy, and others the president has commissioned.

Hotels and land around the Sharm el-Sheikh tourist resort are also a source of Mubarak family wealth.