And for the poor, who spent a very large amount of their income on food, this is life threatening.

This is part of the plan by the elitists to reduce the world population.

Abdolreza Abbassian, an economist at the FAO, said: “The new figures clearly show that the upward pressure on world food prices is not abating.

“These high prices are likely to persist in the months to come. High food prices are of major concern especially for low-income food deficit countries that may face problems in financing food imports and for poor households which spend a large share of their income on food.” 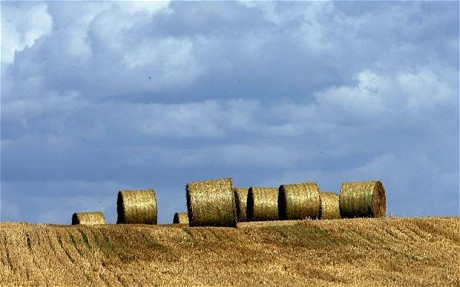 When last month we highlighted the FAO’s periodic report which noted that food prices had surged to a fresh all time high, Zero Hedge first predicted that food riots were imminent.

Fast forward 6 rioting countries and 2 revolutions later, to today when we get an update from the UN’s Food and Agriculture Organization, where we read that, not surprisingly “the FAO Food Price Index (FFPI) rose for the seventh consecutive month, averaging 231 points in January 2011, up 3.4 percent from December 2010 and the highest (in both real and nominal terms) since the index has been backtracked in 1990.”

And while it is painfully obvious to anyone who shops for groceries, but not to Genocide Ben, nothing is ever obvious to him, here is Reuters’ take on the numbers: “Up for the seventh month in a row, the closely watched FAO Food Price Index touched its highest since records began in 1990, in nominal terms, and topped the high of 224.1 in June 2008, during the food crisis of 2007/08.” Yes, oil may not be at its all time highs from the summer of 2008, but food has already surpassed it.

A graphic presentation of what guarantees many more revolutions, courtesy of Gen Ben: 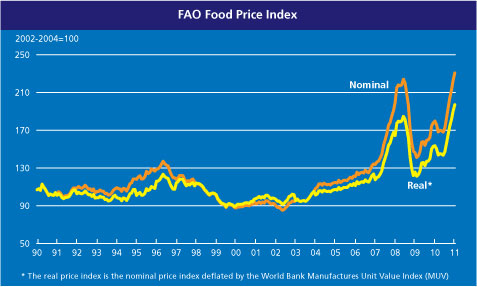 Surging food prices have come back into the spotlight after they helped fueled protests that toppled Tunisia’s president in January. Food inflation has also been among the root causes of protests in Egypt and Jordan, raising speculation other nations in the region would secure grain stocks to reassure their populations.

Severe drought in the Black Sea last year, heavy rains in Australia and dry weather in Argentina and anticipation of a spike in demand after unrest in north Africa and the Middle East has helped power grain prices to multi-year highs.

The FAO’s Sugar Price Index soared to a record high of 420.2 points from 398.4 points in December.

Its Cereals Price Index, which includes prices of main food staples such as wheat, rice and corn, rose to an average of 244.8 points in January, the highest level since July 2008 but below its peak in April 2008, the data showed.

The Oils Price Index rose to 277.7 points in January from 263.0 points in December and came close to the June 2008 record level.

On the other hand, the anger which will sooner or later be focused on none other than Ben Bernanke for starting a wave of global revolutions, may be diluted a little bit after JC Trichet said during a media press conference earlier that “inflation is contained.” It appears he is also 100% confident that years of pent up hunger and anger can be eliminated with a 15 minute waving of a magic wand.

As usual, keep an eye on cotton, wheat and rice: with central bankers now stuck firmly in denial, these are the only indicators that matter.