While natural viruses and bacteria respect species barriers, the storm of artificial genetics created by synthetic biology engineers – in order to eliminate the flow of crude oil and gasses in the Gulf of Mexico – are actually designed to cross species barriers. This has created new viral and bacterial pathogens never seen before. It is directly responsible for the spreading of drug and antibiotic resistant viral and bacterial outbreaks along the Gulf Coast, a pestilence that I have named The Gulf Blue Plague.

Genetic engineering – synthetic biology – involves designing artificial genes to deliberately cross species barriers by invading their genetic makeup. Simply explained, it improves the direct transfer of genetic material to an unrelated species. This is called Horizontal Gene Transfer (HGT), or Lateral Gene Transfer (LGT), and is usually accomplished with the conveyance of genes by infectious viruses named bacteriophages, or simply ‘phages’. LGT or HGT is any process in which an organism transfers genetic material (i.e., DNA) to another cell that is not its offspring. It has been used by genetic engineers to make Transgenic Organisms.

Engineered genetic modification creates a transgenic organism by inserting DNA into a host organism, such as bacteria, with the assistance of a virus or a plasmid. The mature host organism will then pass on the DNA which has been artificially inserted into its genome.

Transgenic DNA typically contains genetic material from bacteria, viruses and other genetic parasites. This is the cause behind diseases as well as the antibiotic resistant genes that make infectious diseases untreatable. Horizontal transfer of transgenic DNA has the potential to also create new viruses and bacteria that cause diseases and spread drug and antibiotic resistance genes among pathogens.

Genetic material released from both dead and live cells persevere in all environments. Our entire biosphere is being exposed to all kinds of new gene combinations that did not previously exist in nature and would never have come into being without synthetic gene engineering.

Bacteriophages are a class of viruses that infect bacteria. They are simply a “package” of DNA surrounded by a protein “coat”. This coating has special properties that make it stick to bacterial cell walls. Once attached, they inject their DNA into the bacteria. Viral DNA forces the invaded cell to stop its normal activity and, instead, it will reproduce millions of copies of the whole virus.

When new viruses are produced in the bacteria, a piece of bacterial DNA may become enclosed in the virus coat. The virus will then carry this bacterial DNA to other bacteria where it becomes a part of their chromosome. This is called bacterial transduction and is especially common in water.

Synthetic DNA transfer by a virus causes an uncontrolled increase of genetically engineered genes by microorganisms. These bacteria then spread over wide distances on dust particles and in the oceans. They are ingested by birds that spread them transcontinentally when they migrate. They are also spread by fish and other marine life that also migrate from ocean to ocean. In other words, this eventually causes a worldwide distribution. But the worst part of all this is that effects on the entire earth biosphere is absolutely unknown.

We have a catastrophic biological disaster in the Gulf of Mexico. This is because the cells of all species, including those of mankind, can and do adopt foreign genetic material from both dead and live cells. According to biology and genetics scientists, this is what we can expect as a result:

As I was writing this article, I received an e-mail from a news blog owner in Spain. He informed me about an important commentary made by a well know university biologist as a reply to my previous research written in The Perfect Genetic Storm. He felt the professor’s reply was extremely important and wanted me to know “we are spreading this information so there will be an end to this madness” in the Gulf of Mexico.

The following excerpts are translated from the Spanish blog Noticias de Abajo:

Biologist Máximo Sandín is the former Biology Department professor at the Independent University of Madrid where he taught on Human Evolution and Ecology. He has directly commented on the translated article The Perfect Genetic Storm – Synthetic DNA and the Gulf Blue Plague.

Dr. Sandín is the author of We are Virus and Bacteria as well as many other publications. 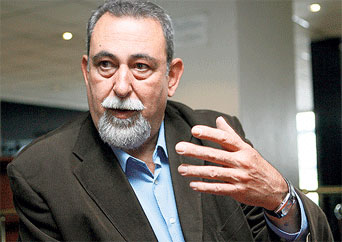 “I believe that some (rather many) of the activities of the “biotechnology” or “bioengineering” companies are becoming ever more dangerous each day because their practices seem to be completely behind the back of present scientific knowledge.

Their pretensions to change “genes” voluntarily, or to modify or interfere in the natural phenomena, are based on a declining conception that does not genetically consider the ecology. These genetically modified genomes are very unstable due to the way they are obtained. For that reason, the genes are transferred to the modified or transgenic organisms that produce a permanent biological contamination in the ecosystems whose effects are unforeseeable.

On land, communities of associated bacteria and viruses (bacteriophages or “phages”) plentifully exist in the ecosystem for the purification of the fresh water, degradation of toxic substances, waste product recycling, CO2 production, and nitrogen fixation in plants. These communities genetically exchange information by means of plasmids and viruses. The viruses control the bacterial population. For that reason, the altered transgenic genes can cross to other organisms in the ecosystem. This practice has been repeatedly denounced by prestigious and independent scientists, although the mass media does not report this.

The populations of bacterial and viral communities in the oceans are spectacular. It has been determined that there are one million bacteria and ten million viruses per milliliter; however, for some scientists these figures are conservative.

Their functions are of equal importance for the marine ecosystems. They are in the base of the trophic pyramid for the control of microorganism populations, in the degradation of ocean waste, in the photosynthesis and respiration of the ocean, and the CO2 interchange with the atmosphere, including the formation of clouds.

We now have news on the methods to fight against the petroleum flow in the Gulf of Mexico. The suspicions that they have been using bacteria with “synthetic” or genetically modified genomes are very founded if we consider that the megalomaniac Craig Venter is involved.

What is being observed is not so much that the “synthetic microbes” produce “mutations” in the natural microorganisms, because that phenomenon is more of a localized problem. The true problem is that the horizontal transference of these modified genes between marine microorganisms is taking place, and that would be a “permanent biological contamination” of the ocean where the medium and long term effects cannot be predicted; but with complete certainty this will be a serious danger for the marine ecosystem in every area. I guess I will have to hope, but if these crazy activities go unchecked, we will end up confronting a problem for which we cannot find a solution.”

As I’ve been saying for months,

“Wherever the Gulf Wind Blows and the Gulf Water Flows”