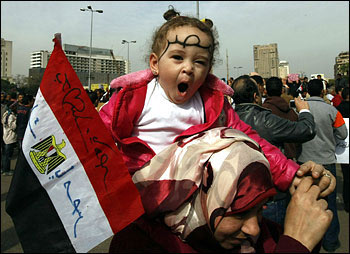 The Egyptian government blocks Twitter after thousands of protesters took to the streets of Cairo to demand an end to the 30-year-rule of President Hosni Mubarak.

Peter Bouckaert, the emergency director at Human Rights Watch, said hospitals confirmed that they received several wounded looters shot by the army carrying police identification cards. They also found several cases of looters and vandals in Cairo and Alexandria with police identification cards. He added that it was “unexplainable” that thousands of prisoners escaped from prisons over the weekend.

“Mubarak’s mantra to his own people was that he was the guarantor of the nation’s stability. It would make sense that he would want to send the message that without him, there is no safety,” Bouckaert said.

Over the past three days, state television has been reporting alarmist news about violence and criminals among the demonstrations in an attempt to discredit the democratic movement.

The rights group’s findings came as pro-democracy demonstrators converged on Tahrir Square in Cairo, vowing to bring 1 million people to the streets of Egypt.