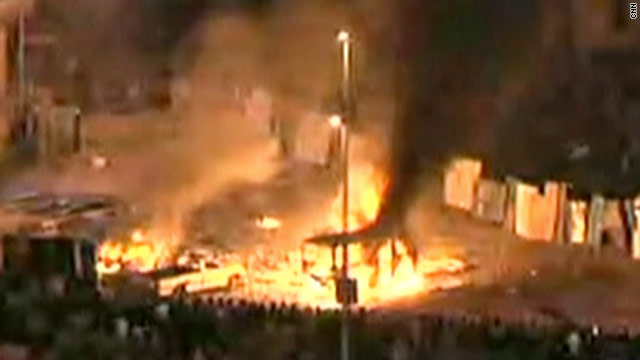 Read full coverage of the unrest in Egypt updated continually by CNN reporters worldwide. Send your photos and video to iReport and see CNN in Arabic here. See also this strong roundup of timely, insightful views on the wave of upheaval in the Arab world.

Fighting erupts in Tahrir Square as anti-government demonstrators and supporters of President Hosni Mubarak throw rocks and brandish clubs. The clashes follow a call by the Egyptian military for protesters to go home.

Pro-Mubarak forces tried to push their way into the square through numerous side streets and were met with, in some cases, cordons of peaceful protesters and, in others, by those throwing large chunks of stone or concrete.

– Turkey tells Mubarak to listen to the people (Reuters):

JERUSALEM (Reuters) – If Egypt’s President Hosni Mubarak is toppled, Israel will lose one of its very few friends in a hostile neighborhood and President Barack Obama will bear a large share of the blame, Israeli pundits said on Monday.