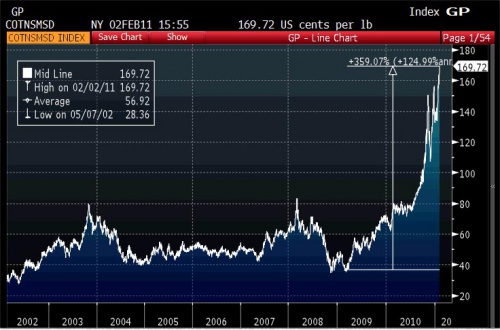 – US cotton rises for third day as mills rush to buy (Reuters):

Cotton futures have rallied almost 25 percent since the
middle of January, the latest wave of a historic run that began
in 2010 and sent cotton prices to their loftiest levels in
almost 150 years.

Cotton is the biggest gainer of commodities on the
Reuters-Jefferies commodity index in 2011, matching a feat it
achieved in 2010 when it gained 90 percent for the year.
(Graph: link.reuters.com/kew48n)

Sharon Johnson, senior cotton analyst at brokerage Penson
Futures in Atlanta, said it is “possible there’s a squeeze” in
the U.S. cotton market.

But Johnson said a new exchange rule could alleviate
concerns that a squeeze is underway. She explained that ICE
Futures U.S. may soon require investors to tell the exchange
how they plan to hedge certain long and short positions in
excess of 300 lots of the spot contract.

On Thursday, the market will look at the U.S. Agriculture
Department’s weekly export sales report to gauge demand for
U.S. cotton.

The market will then turn its attention to industry group
the National Cotton Council of America which will release its
annual plantings survey for cotton at its annual meeting in San
Antonio, Texas on Friday.

The United States is the biggest fiber exporter in the
world and such a rise in plantings is seen by some in the trade
as not enough to satisfy global cotton demand.
(Reporting by Rene Pastor; Editing by David Gregorio)