If ever there were REAL terrorists out there, then why have they never attacked an event run by elitists?

It is because there are no REAL terrorists out there.

We the people are all terrorists now.

A policeman pulled me off the train, bound my hands behind my back and frogmarched me into an icy field by the rail track 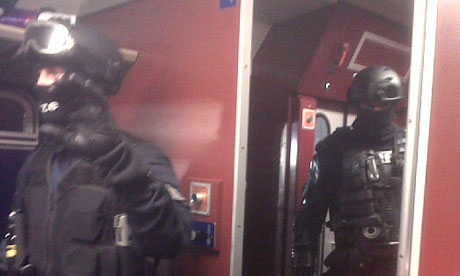 My day began listening to George Osborne debate the fragility of the global economy. It ended sitting on the floor of a freezing underground car park, hands bound behind my back, in the custody of Swiss riot police.

A peculiar ordeal in ostensibly the world’s most peaceful nation began when, leaving Davos after four days covering the World Economic Forumsummit, my taxi to the Swiss resort’s railway station got clogged in traffic caused by an anti-capitalist demonstration. I hopped out and walked past a line of police to reach a platform where an uneasy mixture of demonstrators, skiers in full gear and WEF delegates were milling around. There were a few yells and chants – and the tinkling of glass being broken somewhere nearby.

A train to Zurich arrived and as I boarded, my carriage filled with protesters handing out beers and leaflets. They were a friendly enough bunch, mostly in their late teens and twenties, and the journey began uneventfully, albeit to a soundtrack of loud europop. After 30 minutes or so, a convoy of police vans screamed down the mountain, sirens blaring, on a road alongside the railway, and overtook the train. It stopped and was surrounded by riot police wearing full body armour, carrying shields and bearing what appeared to be guns capable of firing rubber bullets. Minutes later, a woman burst into our carriage eyes streaming and squealing in pain after being pepper sprayed for sticking her head out the window to gesture at police.

It dawned on me that this was serious – and that it could also be newsworthy. When the police, dressed in almost comically sinister in Robocop-style gear, came into my carriage, I took a few photos of them with my BlackBerry and attempted a video (which didn’t come out). The cops went through with dogs, picking anyone who looked vaguely like a protester and ordering them off the train. Skiers and those not wearing anarchist fashion were left – but selection was fairly arbitrary. A Greenpeace activist, Bruno Heinzer, who had been in Davos for a WEF fringe event, was bemused to find that his younger colleague and girlfriend were taken off, while he was left alone. I was initially ignored until a policeman twigged my BlackBerry and, deaf to my protestations, he pulled me off the train, suitcase, laptop bag and all. With about 50 others, I had my hands bound behind my back by plastic ties. We were searched and the contents of our pockets were put in plastic bags around our necks. We were frogmarched into a snowy field alongside the railway line, and ordered to wait,surrounded by armed police.

When I explained that I was a journalist, I was unconvincingly told in broken English that I looked like a “picture on a wall” of a rioter in Davos, which I took to mean I looked like some sort of photofit picture. I asked my arresting officer if he really believed I’d been rioting in a Banana Republic overcoat, dragging a wheely bag and a laptop. He affected incomprehension. It got dark and very cold as we shivered in the snow. Eventually, the police herded us into vans and drove us to a police station in a town called Landquart. Incongruously, the Monkees’ I’m a Believer blasted out from the van’s radio. We were marched down a ramp into an underground car park beneath the police station where we were ordered to sit, around the walls, still handcuffed, and forbidden from talking. Six police officers stood guard and forbade conversation – one young woman was made to sit in a distant corner, facing the wall, primary school-style, for talking. Every so often, the motion-sensitive lights went off, plunging us into pitch darkness.

One by one, we were taken upstairs to the police station, at a rate of perhaps one every 15 minutes. After an hour or so, a policeman finally listened to my appeals and, examining my passport and press card, took me upstairs. I was photographed, mugshot-style, holding a number. Then an English-speaking senior officer ordered me to delete any pictures taken on the train, and to rip out any pages from my notebook relating to the incident. I declined, asking him whether it was truly illegal in Switzerland to take pictures of the police. He replied that policing the World Economic Forum was a “special zone” and that “special rules” applied. “You have one minute. You can do this and go or, if you don’t, you stay here,” he said. Again demurring, I asked to make a phone call – which prompted the assembled police to go into a huddle. Instead, the senior officer reached for his phone himself and made a long, animated call in German. More discussion ensued when he had hung up. Then he strolled over and he snapped: “You can go back to your country.”

Along with a contingent of anarchists, I was driven to another railway station, where we were uncuffed and put on a train to Zurich. The entire affair lasted three hours. It occurred to me that the last flight to London had probably gone.

The police didn’t seem to be charging any of the demonstrators who were hauled off that boisterous train. They were, as one of my fellow captors told me, just trying to scare us: “They had been sent up to Davos and they need to show they’re doing something. This is their way of saying ‘don’t come back to Davos next year’.”

Reuters reported that things had become heated in Davos – bottles were thrown at police, who responded with water cannon.

At no stage were the cops particularly frightening, And throughout, I found it hard to take the situation seriously – this was Switzerland, not Iran, and things would be sorted out soon enough. But there is something sinister, particularly in this age of Twitter, Flickr and citizen journalism, in being ordered to delete photographs and rip up a notebook. And it cannot be right for demonstrators to be arbitrarily rounded up, after an event, and held captive – irrespective of whether they had personally committed acts of violence. This, it seems, was kettling – Swiss style.

Inside the WEF’s calm cordon of privileged elite, my fellow delegates had enjoyed Standard Chartered bank’s annual party the previous night, featuring an ice bar and sushi canapes, followed by Google’s hip offering of cocktails and dancing. The talk had been of economic recovery, the rise of emerging nations in the east and esoteric banking regulation. It was an education to break through the cordon and unwittingly experience the grim side of Davos.