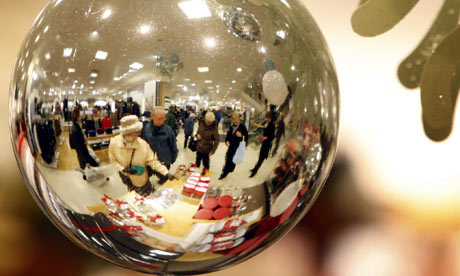 December was a difficult month for many retailers, who reduced the number of staff hours. Photograph: Danny Lawson/PA

Store bosses cut the equivalent of more than 10,000 full-time jobs in December as they reduced staff working hours and neglected to offer overtime during the industry’s busiest month of the year.

The number of hours worked by retail employees was 1.5% lower in December compared with the same month of 2009, according to the BRC-Bond Pearce Retail Employment Monitor.

The authoritative survey, whose respondents speak for 50% of the sector’s turnover, also reported a “noticeable weakening in sentiment” over the last 12 months. It said one in three retailers planned to cut jobs by April compared with 13% a year ago.

“December was a difficult trading month for some retailers,” said the BRC’s director general, Stephen Robertson, who said the 1.5% fall in hours worked was equivalent to the loss of about 10,300 full-time jobs. “Overall, employment growth faltered because stores were less busy, so there were fewer working hours than the previous year.”

The grim figures came as a plan to build a £300m shopping centre in Wolverhampton, which would have been anchored by Marks & Spencer and Debenhams, looked likely to be shelved.

Wolverhampton city council had stepped in to back the 600,000 sq ft development two years ago when a group of northern Irish investors pulled out. However council officers have now decided the scheme is too risky and it was expected to be scrapped at a meeting of the city cabinet last night.

A number of smaller shopping centres have fallen victim to the credit crunch. Australian property group Westfield put UK projects on hold last spring, with the notable exception of a development at Stratford, in light of the deteriorating outlook for consumer spending.

Major store groups such as Argos owner Home Retail have been reducing staff hours as part of a drive to cut costs amid difficult trading conditions. High street chains are also coming under pressure from supermarkets, which are tightening their grip on the sector and have major ambitions in non-food sales.

Retail bosses also took on fewer temporary Christmas staff, but that was not the reason behind the decline as the sample looks at hours worked by existing employees.

At the prime minister’s jobs summit earlier this month, the country’s biggest supermarkets pledged to create more than 30,000 jobs this year as one of the biggest store-opening sprees in the history of UK grocery retailing gets under way.

Christine Tolvas-Vincent, head of retail employment at law firm Bond Pearce, said: “The overall figures are challenging. It is still too early to assess the impact of the public sector cuts on the private sector as a whole but there must now be some doubt cast on the extent to which retailers can absorb job losses.”