So let’s take a look at JP Morgan:

– Bear Stearns Cheated Clients Out of Billions, JP Morgan Knew About This Fraud Since Spring 2008

– JP Morgan Sold Investors MBS Covered By ‘SACK OF SHIT’ Loans … Then Shorted All Those With Exposure: A Goldman-AIG Redux 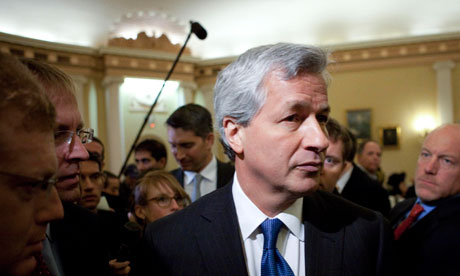 Jamie Dimon, the chief executive of JP Morgan, said some banks were stabilising influences during the financial crisis. Photograph: Bloomberg via Getty Images

The head of JP Morgan has delivered a furious tirade against “banker bashing”, complaining that the entire industry is being tarred with the same brush and implying that bankers have become political whipping boys.

Jamie Dimon, one of Wall Street’s best known and most respected chief executives, told an audience at the World Economic Forum in Davos that there was a “huge misconception” that all banks ran into trouble during the financial crisis. In fact, he said, JP Morgan and its stronger rivals were “stabilising” influences and he insisted that banks would not “bend down and accept” abuse.

“Not all banks needed the Tarp [US government bailout money]. Not all banks would have failed,” said Dimon. “That one assumption drives a lot of arguments.”

Dimon, who was once characterised as Barack Obama’s favourite Wall Street banker but who fell out with the administration over financial reform, made clear his fury at the tone of public, political and media attacks on banks.

“This really is a terrible thing to do,” said Dimon. “I don’t lump all the media together. There’s good, there’s bad, there’s smart, there’s responsible, there’s irresponsible media. I don’t put them all together. It’s an unproductive and unfair way of treating people.”

His remarks chime with other bank bosses who have also been trying to turn the public’s attitude towards the sector, which has been struggling with its reputation since the 2008 financial crisis.

Bob Diamond, chief executive of Barclays, told the Treasury select committee of MPs earlier this month that the “period of remorse and apology” for banks needed to end.

Prime Minister David Cameron has also warned against “banker bashing” and said that a “lot of people” were to blame for the banking crisis.

JP Morgan, which employs more than 200,000 people globally including about 17,000 in Britain, was among the more profitable financial players throughout the credit crunch. When smaller rival Bear Stearns failed in March 2008, JP Morgan bought the business to rescue it from bankruptcy – an act, Dimon said, that was at the behest of Washington: “JP Morgan bought Bear Stearns because the US government asked us to.”

He reminded an audience of business chiefs and policymakers that JP Morgan subsequently bought another struggling US high street lender, Washington Mutual, to help stabilise the financial system.

On a panel moderated by the CNN presenter Fareed Zakaria, Dimon went on to hit out at President Obama’s former economic adviser, Larry Summers, who recently accused banks of spending $1m per congressman in lobbying efforts to oppose regulatory reform in the US.

“In a democracy, you have the right to petition government – it’s in the number one amendment,” said Dimon, who accused Summers of making “ridiculous” statements. The JP Morgan chief said banks had supported certain aspects of reform – including so-called resolution authority easing the process of winding down failing institutions. But he said the industry fought reforms that were “irrational”.

“I can acknowledge the need for massive reforms after what happened,” said Dimon. “But to suggest we’re supposed to just bend down and accept it because we’re banks – that’s not fair.”