Just exchange the Fed with the BoE and ‘THE BEN BERNANK’ with ‘THE MERVY KING’.

And now Mervyn King warns of the fallout of quantitative easing, which is inflation!

Mervyn King is a criminal and an elite puppet.

Britain’s “uncomfortably high inflation” is of more concern to the Monetary Policy Committee (MPC) than the surprise fall in gross domestic product, Mervyn King, the Governor of the Bank of England, has said. 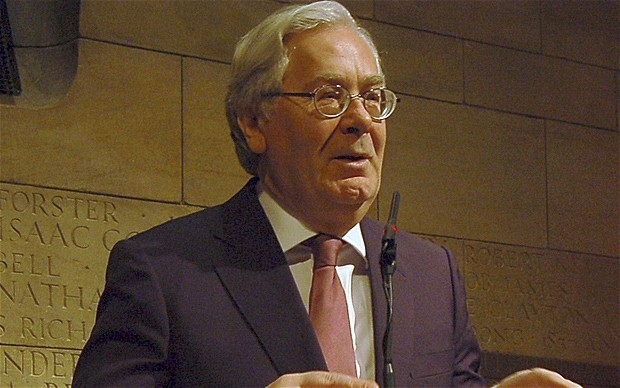 Mervyn King said the idea that the Bank of England could have preserved living standards by preventing a rise in inflation was ‘wishful thinking’ Photo: REUTERS

Mr King warned that inflation was likely to rise to between 4pc and 5pc over the next few months, before falling back next year. He said that inflation has climbed to its current level of 3.7pc because of rising import and energy prices and taxes, and that these factors had squeezed real take-home pay by around 12pc.

In a speech in Newcastle that included references to both Ken Dodd and Leo Tolstoy, Mr King said the shock 0.5pc fall in GDP over the fourth quarter of 2010 served as a reminder of his comment last year that the recovery would be “choppy”. But he added: “Of more immediate concern to the MPC is that we are experiencing uncomfortably high inflation.”

The Governor said that although there is much “unhappiness” focused on the high rate of inflation there was a “misapprehension” in some quarters that the MPC “could have prevented the squeeze in living standards by raising interest rates over the past year to bring inflation below its present level”.

“That view is a misunderstanding of how monetary policy works,” he said. If the MPC had raised interest rates significantly then “inflation might well have started to fall back this year, but only because the recovery would have been slower, unemployment higher and average earnings rising even more slowly than now. The erosion of living standards would have been even greater.” The Governor said the idea that the MPC could have preserved living standards by preventing a rise in inflation was “wishful thinking”.

Observers should keep an eye on the “big picture”, said Mr King, but headlines would “inevitably” focus on the “immediate effect of shocks on CPI inflation”. But he added: “Central banks do not set policy or react according to headlines.”

He opened his wide-ranging speech by saying: ” ‘When it comes to measuring success, don’t count money, count happiness.’ The advice, not of a Government monitor of our wellbeing, but Ken Dodd in 1964. Unfortunately, happy is not a word to describe the global economic scene. As Tolstoy might have said: All happy economies are alike; each unhappy economy is unhappy in its own way.”

– UK: Interest Rates ‘Will Have To Rise Sixfold in 2 Years’ to Cope With Rising Inflation

– Bank of England: Recession will be the worst in modern history

“By a continuing process of inflation, governments can confiscate, secretly and unobserved, an important part of the wealth of their citizens. There is no subtler, no surer means of overturning the existing basis of society than to debauch the currency. The process engages all the hidden forces of economic law on the side of destruction, and does it in a manner which not one man in a million is able to diagnose.“
– John Maynard Keynes