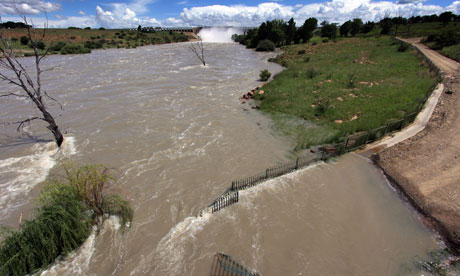 The Vaal dam overflows near Johannesburg earlier this month. Seven of South Africa’s nine provinces have been affected by flooding. Photograph: Jon Hrusa/EPA

Flooding in South Africa has killed more than 100 people, forced at least 8,400 from their homes and prompted the government to declare 33 disaster areas.

With unusually heavy rainfall forecast until March, the UN has warned that almost every country in southern Africa is on alert for potentially disastrous flooding.

The government said that 88 deaths in the rising toll were in the eastern KwaZulu-Natal province. The costs of damage to the infrastructure in the seven of the country’s nine provinces affected is estimated at 160bn rand (£14bn).

The Johannesburg area and northern and eastern provinces have experienced some of their greatest rainfall in 20 years. Flimsy houses in townships, where drainage systems are sometimes poor, are particularly vulnerable to the deluge.

Bathabile Dlamini, the social development minister, warned that 20,000 people, or about 5,000 families, have been affected in provinces that are running out of money for flood relief. Another 20m rand was needed for humanitarian assistance, she said, adding: “More and more provinces are sending in their requests.”

Dlamini admitted the government is in a race against time to avert a humanitarian crisis and said the health department was on alert for a possible cholera outbreak. Farms have also been saturated in Africa’s biggest food producer, but farmers will not receive government compensation. The logistics firm Transnet said this month that heavy rains had disrupted its freight rail operations, affecting South Africa’s coal and maize exports.

The UN warned last week that flooding poses a threat in most southern African countries. Some of the biggest rivers in the region, the Zambezi and the Okavango, have risen to double their normal levels.

Elisabeth Byrs, a spokeswoman for the UN’s Office for the Co-ordination of Humanitarian Affairs, said: “We fear flash floods. It’s rather common in the region and this time we are seeing heavier rainfall than in previous years. Five countries are on alert for flooding – Botswana, Mozambique, Namibia, Zimbabwe and Zambia – and South Africa will now declare a disaster.”

She added: “All neighbouring countries including Madagascar are on alert … We could have an extremely major disaster if prevention measures are not stepped up over the next six weeks.”

Mozambique has been hit hard, with at least 10 people killed and more than 13,000 people seeing their homes lost or damaged owing to high waters. There are fears of a repeat of the country’s devastating floods in 2000 that left 800 people dead.

Meteorologists believe the floods are caused by a natural weather cycle known as La Niña and the Southern Oscillation mechanism, which has been linked to recent flooding in Australia and the Philippines.