And this happened in the US, not in China.

Fascism we can believe in!

– US Supreme Court Landmark Decision: The Constitution is VOID

– Physicist Michio Kaku’s New World Order Speech: ‘If You Are Against World Government You Are A Terrorist’

The land of the free. WTF! 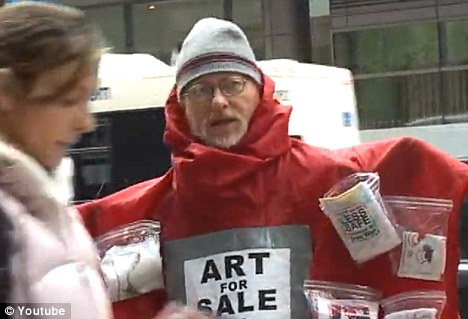 (Now scroll down to see the video)

An artist who used a video camera to record being arrested by police is facing up to 15 years in prison.

Chris Drew has been charged with Class 1 felony under the Eavesdropping Act in Chicago, Illinois.

The bemused activist said he did not know anything about the law when he was protesting about restrictions on where artists can sell their work.

He has resorted to civil disobedience in his fight against rules he regards as draconian – and got a friend to record his arrest on an Olympus camera.

Mr Drew expected police to take him into custody before releasing him over the misdemeanour – but now he’s facing up to 15 years in jail.

He will go on trial on April 4 charged with using a digital recorder to capture his arrest on December 2, 2009.

He was selling silk-screened patches for $1 when he was stopped by police.

Footage of the incident has been posted on YouTube.

Three officers surround him in the tape before he is led away across the road and put into a vehicle.

The suspect told the Chicago News Cooperative: ‘I expected to be charged with a misdemeanour.

‘I didn’t know about the eavesdropping law. But when you fight for your rights, you have to expect anything. I have a ’60s bent to me. I won’t back down. I won’t be intimidated.
‘From the moment I comprehended these charges, I knew we had to change this law.’

Mr Drew, the founder of the Uptown Multi-Cultural Art Center, had set out to get himself arrested for selling items in the street three times before he was finally stopped by police.

Under the Eavesdropping Act, which applies in 12 states, all parties must consent to a recording being made.

Maryland, Illinois and Massachusetts are the only states where it is illegal to record conversations with the police.

In Illinois police are currently prosecuting nine people for alleged breaches of the law.

The maximum penalty is only three years behind bars for the first time the law is broken and five years if it is done again,

But anyone recording a judge, attorney general, state attorney or police officer can be sent to jail for up to 15 years.

1 thought on “Chicago Artist’s Protest Backfires, Faces 15 Years In Jail For Recording His Own Arrest On Video”