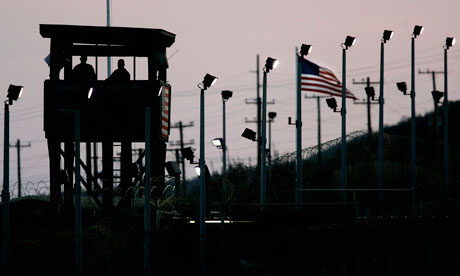 The move to begin new military trials is a defeat for Obama, who had promised to close Guantánamo within year of taking office in January 2009 after describing the prison there as damaging to the US. Photograph: Mark Wilson/Getty Images

The Obama administration is abandoning attempts to close the Guantánamo Bay prison in Cuba and will shortly begin new trials there after Congress blocked the president from bringing accused terrorists before courts in the US.

The defence secretary, Robert Gates, is shortly expected to lift an order imposed on the day of Obama’s inauguration two years ago halting the start of new military tribunals, according to the New York Times. New charges against some of the more than 30 detainees identified for prosecution are expected within weeks.

Likely targets include Abd al-Rahim al-Nashiri, a Saudi accused of planning the suicide bombing of the American warship USS Cole in Yemen in 2000, which killed 17 sailors. He is a “high-value detainee” who prosecutors have indicated could become the first to face the death penalty.

The New York Times said that preparations for a new batch of military tribunals, including draft regulations for their conduct, are underway.

Al-Nashiri’s trial is likely to prove controversial because some of the evidence against him is based on his interrogation and torture, including waterboarding, at secret CIA “black sites”, including one in Thailand. CIA tapes of the interrogation were later destroyed reportedly on the orders of the head of the agency’s clandestine operations, José Rodriguez, although no charges were brought.

Al-Nashiri has told military tribunal hearings that he made a series of false statements under torture, through waterboarding and being subject to mock execution with a power drill and a gun, including confessing to the attack on the USS Cole and claiming that Osama Bin Laden has a nuclear bomb.

Al-Nashiri’s military-appointed lawyer, Lieutenant Commander Stephen Reyes, has said that his client is only being prosecuted at Guantánamo because of the issues concerning his torture. Reyes noted that two of al-Nashiri’s alleged co-conspirators in the attack on the USS Cole were indicted in federal court.

The New York Times, quoting anonymous administration sources, said the government is also preparing an executive order to create a parole board-like system to periodically review the cases of the nearly 50 detainees who will continue to be held without trial.

The move to begin new military trials is a defeat for Obama, who had promised to close Guantánamo within a year of taking office in January 2009 after describing the prison there as damaging to the US. He proposed to try some detainees before civilian courts while others would still face military tribunals but with restrictions on evidence gathered during torture.

But that plan was repeatedly postponed as the administration faced problems finding a prison to house alleged terrorists in the US and in the face of resistance from Congress which, among other things, cut off funds to move the accused men. The US attorney general, Eric Holder, had proposed prosecuting some of those accused of the 9/11 attacks, including Khalid Shaikh Mohammed, in a Manhattan court near Ground Zero. But two weeks ago, Obama signed a bill passed by Congress that blocks the transfer of detainees to the US or foreign countries, effectively preventing closure of the prison at Guantánamo.

The president said he objected to the provisions and would work with Congress to overturn them but that appears unlikely to happen now that the Republicans control the House of Representatives.

There are 174 detainees remaining at Guantánamo. A government-created taskforce has recommended that 36 be prosecuted and 48 be held indefinitely as enemy combatants.

Thirty Yemenis were approved for release if security conditions in their home country improve.

The Pentagon did not respond to questions about the plan to begin new trials.