Iran has been offered access to peaceful nuclear technology and an end to UN sanctions in return for surrendering its enriched uranium stockpile, which can be used to make nuclear weapons. 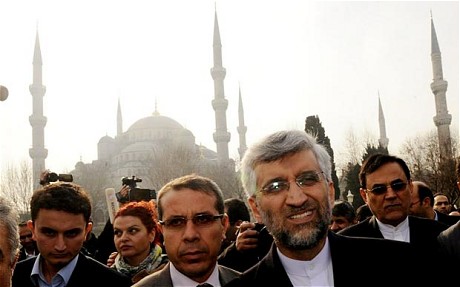 Baroness Ashton made the offer on behalf of the P5+1 – the five permanent members of the United National Security Council and Germany – at the start of Friday’s dialogue on Iran’s nuclear ambitions, a senior US diplomat told The Telegraph.

Prospects of reaching an agreement appear to have brightened since December, when the two sides last met.

“Iran’s nuclear programme has been slowed down and sanctions are hurting them,” the diplomat said. “That means we have time, and they have reason, to reach an agreement.”

But Iran has so far said it is unwilling to surrender its right to enrich uranium – a key part of the deal.

Saeed Jalili, Iran’s chief negotiator, also raised what he called the “fundamental problems of global politics” – a reference to Israel’s strategic weapons capabilities and the presence of US troops of Iraq.

US representatives told Iran these questions could be discussed in a separate bilateral meeting, but it has so far refused to hold such talks.

“Both sides want a negotiated deal” said Bruno Tertais, a nuclear expert, “but they have asymmetric expectations of what exactly it should be.”

In separate behind-the-scenes talks, Turkey has been calling on Iran to agree to the deal as a confidence-building step. Turkish diplomatic sources said the deal had figured in talks with Ali Bagheri, the deputy chief of Iran’s nuclear negotiation team. Mr Bagheri, believed to be a confidante of Ayatollah Ali Khameini, Iran’s supreme leader, has visited Turkey twice in the last three weeks.

Last year, a similar Turkish and Brazilian-brokered deal was rejected by the P5+1 because it would still have left the Iran with enough enriched uranium to make a nuclear bomb. Iran also backed off from the deal domestic opposition.

The P5+1 appears divided on what to do if a deal fails to materialise. The US has suggested it may consider harsher sanctions, but Sergei Lavrov, Russia’s foreign minister, said this would be “counterproductive.”