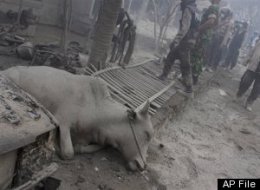 In the latest of a string of mass animal deaths, 10,000 cows and buffalo have died in Vietnam.

Vietnam’s Ministry of Agriculture and Rural Development confirmed the news this week that more than 10,000 cows and buffalos died nationwide due to harsh weather conditions.

Cattle have been dying throughout Vietnam, which has had a particularly intense winter. The northern mountainous province of Cao Bang was hardest hit with 2,260 dead cattle, per Thanh Nien News. Some have said the number of total dead cattle may be as high as 13,000.

Some of the mass die-offs have been explained – for instance, indigestion is thought to be the cause in Italy and the U.S. government has admitted involvement in the South Dakota case. But others remain up for debate.

– New Zealand: Hundreds Of Little Penguins Die And Other Seabirds Wash Up Dead On Beaches

– US, Jacksonville Coast: Hundreds of Pelicans Injured or Killed