“Bankruptcy isn’t perfect, but it’s far superior to any of the alternatives currently on the table.”
– DAVID SKEEL, law professor, University of Pennsylvania

Ready for the Greatest Depression and and the biggest financial collapse in world history?

A Path Is Sought for States to Escape Their Debt Burdens 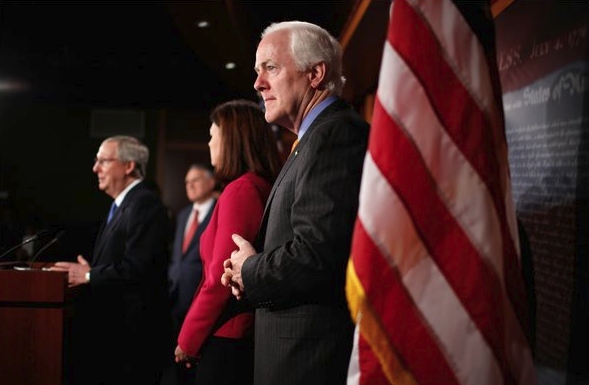 “Right now, there is no provision in the bankruptcy code, as I understand, for a state to go through a bankruptcy-like proceeding, a Chapter 11, where of course, the secured creditors, the bondholders and others would maintain the highest priority…. There’s been some suggestion among commentators, and others, that Congress ought to look at a procedure that would allow that to happen, as one alternative.”
SENATOR JOHN CORNYN, Republican of Texas

Policymakers are working behind the scenes to come up with a way to let states declare bankruptcy and get out from under crushing debts, including the pensions they have promised to retired public workers.

Unlike cities, the states are barred from seeking protection in federal bankruptcy court. Any effort to change that status would have to clear high constitutional hurdles because the states are considered sovereign.

But proponents say some states are so burdened that the only feasible way out may be bankruptcy, giving Illinois, for example, the opportunity to do what General Motors did with the federal government’s aid.

Beyond their short-term budget gaps, some states have deep structural problems, like insolvent pension funds, that are diverting money from essential public services like education and health care. Some members of Congress fear that it is just a matter of time before a state seeks a bailout, say bankruptcy lawyers who have been consulted by Congressional aides.

Bankruptcy could permit a state to alter its contractual promises to retirees, which are often protected by state constitutions, and it could provide an alternative to a no-strings bailout. Along with retirees, however, investors in a state’s bonds could suffer, possibly ending up at the back of the line as unsecured creditors.

“All of a sudden, there’s a whole new risk factor,” said Paul S. Maco, a partner at the firm Vinson & Elkins who was head of the Securities and Exchange Commission’s Office of Municipal Securities during the Clinton administration.

For now, the fear of destabilizing the municipal bond market with the words “state bankruptcy” has proponents in Congress going about their work on tiptoe. No draft bill is in circulation yet, and no member of Congress has come forward as a sponsor, although Senator John Cornyn, a Texas Republican, asked the Federal Reserve chairman, Ben S. Bernanke, about the possiblity in a hearing this month.

House Republicans, and Senators from both parties, have taken an interest in the issue, with nudging from bankruptcy lawyers and a former House speaker, Newt Gingrich, who could be a Republican presidential candidate. It would be difficult to get a bill through Congress, not only because of the constitutional questions and the complexities of bankruptcy law, but also because of fears that even talk of such a law could make the states’ problems worse.

Lawmakers might decide to stop short of a full-blown bankruptcy proposal and establish instead some sort of oversight panel for distressed states, akin to the Municipal Assistance Corporation, which helped New York City during its fiscal crisis of 1975.

Still, discussions about something as far-reaching as bankruptcy could give governors and others more leverage in bargaining with unionized public workers.

“They are readying a massive assault on us,” said Charles M. Loveless, legislative director of the American Federation of State, County and Municipal Employees. “We’re taking this very seriously.”

Mr. Loveless said he was meeting with potential allies on Capitol Hill, making the point that certain states might indeed have financial problems, but public employees and their benefits were not the cause.

The Center on Budget and Policy Priorities released a report on Thursday warning against a tendency to confuse the states’ immediate budget gaps with their long-term structural deficits.

“States have adequate tools and means to meet their obligations,” the report stated.

No state is known to want to declare bankruptcy, and some question the wisdom of offering them the ability to do so now, given the jitters in the normally staid municipal bond market.

Slightly more than $25 billion has flowed out of mutual funds that invest in muni bonds in the last two months, according to the Investment Company Institute. Many analysts say they consider a bond default by any state extremely unlikely, but they also say that when politicians take an interest in the bond market, surprises are apt to follow.

Mr. Maco said the mere introduction of a state bankruptcy bill could lead to “some kind of market penalty,” even if it never passed. That “penalty” might be higher borrowing costs for a state and downward pressure on the value of its bonds. Individual bondholders would not realize any losses unless they sold.

But institutional investors in municipal bonds, like insurance companies, are required to keep certain levels of capital. And they might retreat from additional investments. A deeply troubled state could eventually be priced out of the capital markets.

“The precipitating event at G.M. was they were out of cash and had no ability to raise the capital they needed,” said Harry J. Wilson, the lone Republican on President Obama’s special auto task force, which led G.M. and Chrysler through an unusual restructuring in bankruptcy, financed by the federal government.

Mr. Wilson, who ran an unsuccessful campaign for New York State comptroller last year, has said he believes that New York and some other states need some type of a financial restructuring.

He noted that G.M. was salvaged only through an administration-led effort that Congress initially resisted, with legislators voting against financial assistance to G.M. in late 2008.

“Now Congress is much more conservative,” he said. “A state shows up and wants cash, Congress says no, and it will probably be at the last minute and it’s a real problem. That’s what I’m concerned about.”

Discussion of a new bankruptcy option for the states appears to have taken off in November, after Mr. Gingrich gave a speech about the country’s big challenges, including government debt and an uncompetitive labor market.

“We just have to be honest and clear about this, and I also hope the House Republicans are going to move a bill in the first month or so of their tenure to create a venue for state bankruptcy,” he said.

A few weeks later, David A. Skeel, a law professor at the University of Pennsylvania, published an article, “Give States a Way to Go Bankrupt,” in The Weekly Standard. It said thorny constitutional questions were “easily addressed” by making sure states could not be forced into bankruptcy or that federal judges could usurp states’ lawmaking powers.

“I have never had anything I’ve written get as much attention as that piece,” said Mr. Skeel, who said he had since been contacted by Republicans and Democrats whom he declined to name.

Mr. Skeel said it was possible to envision how bankruptcy for states might work by looking at the existing law for local governments. Called Chapter 9, it gives distressed municipalities a period of debt-collection relief, which they can use to restructure their obligations with the help of a bankruptcy judge.

Unfunded pensions become unsecured debts in municipal bankruptcy and may be reduced. And the law makes it easier for a bankrupt city to tear up its labor contracts than for a bankrupt company, said James E. Spiotto, head of the bankruptcy practice at Chapman & Cutler in Chicago.

The biggest surprise may await the holders of a state’s general obligation bonds. Though widely considered the strongest credit of any government, they can be treated as unsecured credits, subject to reduction, under Chapter 9.

Mr. Spiotto said he thought bankruptcy court was not a good avenue for troubled states, and he has designed an alternative called the Public Pension Funding Authority. It would have mandatory jurisdiction over states that failed to provide sufficient funding to their workers’ pensions or that were diverting money from essential public services.

“I’ve talked to some people from Congress, and I’m going to talk to some more,” he said. “This effort to talk about Chapter 9, I’m worried about it. I don’t want the states to have to pay higher borrowing costs because of a panic that they might go bankrupt. I don’t think it’s the right thing at all. But it’s the beginning of a dialog.”

2 thoughts on “Policymakers Work to Come Up With A Way to Let States Declare Bankruptcy To Get Out From Under Crushing Debts,”