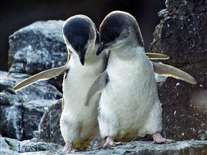 Little penguins are dying in their hundreds, leading conservationists to fear they are starving as a result of the La Nina weather system.

Other seabirds are washing up dead on beaches, raising concerns that species could become extinct if climate change causes extreme weather events to become more frequent.

At Wellington Zoo, two starving little blue penguin chicks have been brought in this week. One died on Wednesday and the other, found at Lyall Bay, was hanging on to life yesterday.

The zoo’s veterinary science manager, Lisa Argilla, said petrels were also starving around Wellington’s south coast, and five shags had been brought in this month. “They’re unable to find enough food. We’ve had a lot of starvations and a lot of mortalities.”

At Banks Peninsula, hundreds of little white-flippered penguin chicks have died of starvation, according to Shireen Helps, who has been caring for the colony on her property for about 25 years.

“There were chicks dying in their burrows, in the hillside, and heaps dying on the water.”

Dr Argilla said the calm La Nina seas meant fewer small fish and plankton close to the surface of the water for them to feed on.

Those brought into the zoo were likely to be just a very small portion of those dying. She was concerned that more frequent extreme weather events could lead to extinctions in some species – penguins, for example, needed five or six years of good conditions for populations to regenerate.

The strong La Nina had brought with it conditions that made for a bad breeding year. “They’re natural occurrences that always happen, but now they’re happening more regularly and it’s playing havoc with wildlife populations.”

However, National Institute of Water and Atmospheric Research principal scientist James Renwick said it was unknown whether La Nina would be stronger or happen more frequently in future.

This year’s La Nina was the strongest since 1975, when Conservation Department seabird scientist Graeme Taylor said many hundreds of seabirds died.

This year shearwaters in northern North Island colonies were dying because of a lack of feeding opportunities, he said, and gannets at Muriwai and Great Barrier Island had experienced a “major failure” of breeding. “Birds are just sitting on empty nests.”

Mrs Helps and husband Francis have 1063 breeding pairs at their colony, but most of the chicks that hatched between October and December have died.

The population had risen from 717 breeding pairs in 2000, but Mrs Helps believed the number of little penguins at the colony could fall next year.

Unusually warm currents had made it difficult for adults to find food, leading them to stay out searching at sea for too long while their chicks needed feeding, she said.

“The chicks got thirsty and hungry and realised Mum and Dad weren’t coming back. A lot ended up in the sea but they were too young.”

The penguins needed to weigh at least a kilogram before they could survive at sea, but when chicks were rescued, it was initially difficult to get them eating again.

“If they’ve had no food for a long time, their whole system shuts down and they can’t digest it. Even if you feed them, they start spitting it up again.”

Conservation Department vet Kate McInnes said that, during La Nina, cold currents did not come up around New Zealand and stir up the ocean to bring food near the surface.

She also advised that freeing birds rescued from starvation was risky.

“There’s still no food out there.”

Around the Snares Islands, 200 kilometres south of the South Island, birds were searching harder for prey and flying closer to fishing boats.

Oamaru Blue Penguin Colony manager Jason Gaskill said no chicks there had starved, but warmer sea surface temperatures led to poorer breeding conditions for fish and less food for penguins, which would affect this year’s season.

– US, Jacksonville Coast: Hundreds of Pelicans Injured or Killed