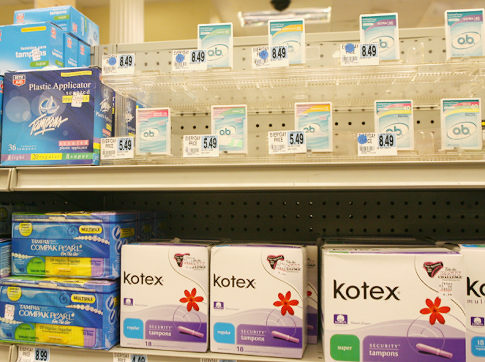 Lombard/News ‘Everyday price’ or not, o.b. tampon shelves are empty at this Rite Aid.

The recent disappearance of a popular tampon brand is really cramping the style of city women.

The popular product is in such short supply that eBay users are bidding up to $76 for three packs, which usually sell for just $8.79 a pack.

And loyalists are taking to blogs and Twitter to figure out where their beloved o.b. tampons might be.

“This month, they were gone, gone, gone,” said freelance writer Janessa Wilson, 40, of Bedford-Stuyvesant, Brooklyn, a user for decades.

“I searched everywhere I could, maybe a dozen drugstores, but I couldn’t find any.”

Johnson & Johnson, the company that makes the o.b. tampons, shed little light on the mystery, saying only that it experienced a “temporary supply interruption” that led to stores being out of stock.

The company wouldn’t explain the manufacturing or distribution glitch, which began in the fall, any further.

And the federal Food and Drug Administration said it was not aware of any product recall, or health and safety concerns, related to the shortage.

Debbie Stoller, editor in chief of the popular feminist magazine BUST, says many women who use nonapplicator tampons do so for environmental reasons, so it was notsimply a matter of changing brands.

“It has been a big deal because it’s one of the only nonapplicator tampons you can buy,” she explained. “People who choose to use this are a little bit politicized around it. They feel very strongly about these tampons.”

Maura Weiler, on the website dscriber.com, described being so loyal to the brand that she tried to buy a box from a colleague after checking her local Target and Walgreens stores with no luck.

“But alas, we learned [the tampon box] was empty before [her colleague] could come up with an asking price,” she wrote.

Johnson & Johnson spokeswoman Yukela Williams apologized to customers about the inconvenience, adding that women should expect to see the product on store shelves soon.

“Thank God – and goddesses,” Wilson said to that.