Founder of sanctuary treating the birds blames chemicals in the water. 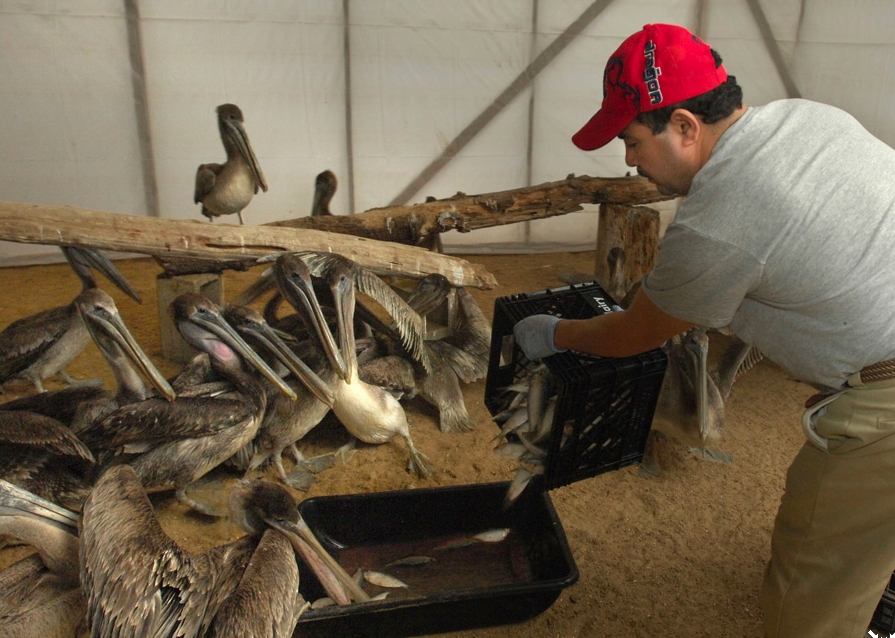 Hundreds of Eastern brown pelicans, some with missing wings and frostbite, have been injured or killed in the St. Johns River the past couple of weeks in the Mayport area.

The exact reason is unknown but the cold weather could have caused hypothermia when the birds landed in the water. The pelicans have been losing a protective coating they have on their body to shield their feathers from becoming saturated by water.

Cindy Mosling, co-founder of the Bird Emergency Aid and Kare Sanctuary on Big Talbot Island, thinks chemicals in the water could be the culprit.

Mosling and her team, which consists of her husband and their only employee, Jose Gutierrez, have been capturing the sick birds for a more than a week when they fly to an open feeding area at their facility. They spot the weak ones and bring them in to be cleaned, warmed and fed.

The sanctuary, known as BEAKS, has about 20 sick pelicans huddled inside a tentlike heated room that are being cared for as more injured pelicans show up.

Without their protective coating, Mosling said the pelicans have no shield from the cold water.

“How would you feel if someone put a wet blanket over you and made you sit outside in the cold?” she said.

Mosling has seen at least 20 dead pelicans so far. Karen Parker of the Florida Fish and Wildlife Conservation Commission said 15 pelicans were found dead Sunday but couldn’t explain the reason.

Bobby Taylor, president of the Florida Open Beaches Foundation, said he hasn’t seen anything that would point to chemical contaminants in the water. But the cold could be taking its toll.

“This is the coldest water I’ve seen in awhile,” Taylor said.

Mosling said this has been happening to the birds for 30 years and cites aqueous film-forming foam as the root of the pelicans losing their protective coating.

About seven years ago, a similar incident occurred when 60 dead pelicans were found in the river near Mayport. There were suspicions that the fire-fighting foam chemical could have contaminated the river when 60,000 gallons was used to put out a gasoline fire in 1993, according to Times-Union archives. The chemical has since been pulled off the market, but the substance can remain in the environment for years, Mosling said.

“The river is like an open sewer,” she said.

In the warming pen at BEAKS, the pelicans hold their feathers in the air because they are soggy and clumped without the protection from their water-repellent coating. They are fed fish multiple times a day, which Mosling’s husband has to buy with the money they get through donations and their own personal income.

BEAKS has been caring for injured birds since it was founded about 30 years ago. It has cared for injured pelicans since it formed and has seen pelicans that have been hurt and killed in the same way. Mosling said nothing is being done to fix the problem.