The people of Europe are indeed ruled by criminals!!!

Here is the proof (Must-read):

Ireland central bank counterfeited 51 billion Euros out of thin air. The amount is not backed by government bonds. Nor was it a loan from the ECB or anyone else. The money is counterfeit in every sense of the word.

Please consider the facts as depicted in Central Bank steps up its cash support to Irish banks financed by institution printing own money.

The Irish Independent learnt last night that the Central Bank of Ireland is financing €51bn of an emergency loan programme by printing its own money.

The figures also provide the latest evidence that responsibility for funding Ireland’s broken banks is being pushed increasingly back on to Irish taxpayers. The loans are recorded by the Irish Central Bank under the heading “other assets”.

It’s OK to print money as long as the ECB is notified?! Excuse me, but this is in direct violation of every EU treaty. Besides, counterfeiting is a crime everywhere. 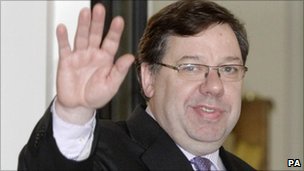 Irish Prime Minister Brian Cowen has announced that he intends to dissolve parliament and call a general election on 11 March.

The Fianna Fail leader promised that budget laws key to the Irish Republic’s 85bn-euro (£72bn) international bail-out would be passed before then.

In a setback for Mr Cowen, he added that five vacated cabinet seats would be reassigned to existing ministers.

His Green Party allies had apparently refused to back a reshuffle.

Support for the government has fallen sharply since it agreed to the November bail-out.

“Prior to the general election we are committed to enacting key pieces of legislation to secure Ireland’s economic future,” the taoiseach (prime minister) said.

He insisted his government’s policies had put Ireland on the path to recovery and economic growth.

“I want us to get through the hard times and see the country prosperous in the future,” he said.

Mr Cowen addressed parliament just hours after five of his ministers resigned, in a move sharply criticised by the opposition.

It had been expected that Mr Cowen would bring in new ministers to replace those who tendered their resignations over the past 24 hours.

Mary Harney from health, Dermot Ahern from justice, Noel Dempsey from transport, Tony Killeen from defence and Batt O’Keefe from enterprise all resigned.

But Mr Cowen announced the five vacated portfolios would go to existing ministers:

Foreign Minister Micheal Martin resigned earlier after a failed bid to oust Mr Cowen from the leadership of the Fianna Fail party.

Mr Cowen said then that he would take over foreign affairs himself.

Enda Kenny, leader of the opposition Fine Gael party, mocked the prime minister, depicting Mr Cowen and the leader of the Greens, John Gormley, as Laurel and Hardy figures.

“It’s another fine mess we have gotten ourselves into,” Mr Kenny said.

“The position that no new minister has been appointed obviously is a case of desperation by the government of being afraid of putting that to a vote in the house.”

The Greens are the junior partner in the governing coalition.

Green Party lawmaker Paul Gogarty said earlier that the cabinet resignations smacked of an “orchestrated plan that has little to do with the country’s interest and a lot to do with Fianna Fail’s interests”.

BBC website readers have been sending in their reaction to this story. Here is a selection of their views.

Brian Cowen is a disgrace and an embarrassment to Ireland. His colleagues are resigning so they can get their pensions and live happily ever after. Fianna Fail and the Greens are finished in this country. Linda, Dublin

This Taoiseach has almost no support amongst the electorate. The only reason that his party is still in power is because of a weak alliance with his cowardly coalition partners. It is time for Cowen to dissolve his government. If not, he risks doing irreparable damage to the party and the country. Colm O’Neill, Wexford

I am ashamed to be an Irish citizen. Having lived more than half my life outside of Ireland I recently returned home to spend time with my elderly parents. I find myself confronted with a circus of events, an array of clowns and an apparent air of smugness. I am considering leaving the country yet again. This time I will never return. Rob, Cork

The mass resignation of retiring cabinet ministers is the latest cynical move by a dying party attempting to breathe some life into an election that will, hopefully, spell their end. Deirdre Kelleher, Cork

It embarrasses me to watch the horse-trading that passes for government in my native country. Talk about moving the seats on the Titanic. It’s the last act of a desperate power hungry and morally corrupt politician. Ronan Byrne, Dorking

Cowen should have gone long ago. His cronies in the banking fiasco should all be held accountable. We are sick of rich people telling us we must all accept ‘the pain’. Barry Doyle, Arklow. Co Wicklow

Fianna Fail will not win this election and Fine Gael are kidding themselves too if they think that people will vote for them as the alternative. Those ministers that have resigned are despised nationwide with the exception of Michael Martin. The upcoming election will be an interesting one. Deirdre O Hara, Belfast, County Antrim

All these resignations are an election strategy for Fianna Fail in order to minimise their expected collapse at the polls. It’s shows pure disregard for the people of this broken republic. Fiachra Flynn, Dublin

I live in County Down in Northern Ireland but work for one of the Irish Banks in Dublin. The country is in such a mess that it would be funny if so many lives were not affected by the situation. Meltdown is not too strong a word. The inmates are running the asylum. John Patterson, Co Down, Northern Ireland

This is a cynical move by giving some back benchers a chance to hold onto their seat in the election. The Irish people are onto Fianna Fail and FF are going to get wiped out. Kevin McCormack, Co Cork