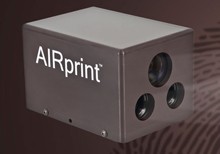 The prototype is able to scan and verify a print in under five seconds, but the device can presently only process one finger at a time, and that finger must stay a fixed distance from the cameras to get a precise reading.

Despite these current limitations, AOS claims that soon the equipment will be capable of reading five prints simultaneously while a person is moving toward or away from the device.

The system will be ready for market in the third quarter of this year, which is bad news for terrorists and soccer hooligans, but a windfall for Big Brother.