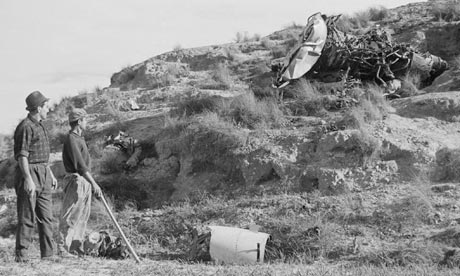 Workmen assist in the search for unexploded US air force nuclear bombs near Palomares, Spain, in 1966. Photograph: Bettmann/Corbis

Spain is insisting that the United States removes tens of thousands of cubic metres of earth still contaminated by plutonium from unexploded US air force nuclear bombs that accidentally fell in the 1960s.

Spain sent a diplomatic note to the Obama administration shortly before Christmas saying that it was time the earth at Palomares, south-east Spain, containing up to half a tonne of plutonium, was removed “without delay”, according to El País newspaper.

Some 50,000 cubic metres of contaminated soil remains at the site, despite efforts by the US to clear up the mess when four bombs fell near Palomares after a B-52 bomber collided with a refuelling aircraft in 1966.

US authorities initially buried equipment they had used to dig up the land after parts of two of the B28 bombs detonated, spreading plutonium across a wide area.

Spain has nowhere to store the contaminated soil, which will take thousands of years to lose its radioactivity.

Experts say that, by sifting the soil, it could be reduced to 6,000 cubic metres, which would fit onto a single bulk carrier ship. The cost is estimated at some €31m (£26.16m) .

“Spain believes the data gathered and the studies carried out so far are sufficient for the process of rehabilitation to be carried out without delay, so that the land can be used without restrictions as the people of the area would like,” El País said.

Spanish officials told the newspaper that the US was worried similar demands might be made by other countries where it had carried out nuclear tests.

“Should the US government decide not to help fund a clean-up, we anticipate Spanish government surprise, significant negative publicity, and some negative impact on other areas of our bilateral relationship,” the US embassy in Madrid warned in an April 2009 cable revealed by Wikileaks.

Tests on local people have shown the plutonium has had little impact on the sparse population. The four areas that are still contaminated have been fenced off and no agriculture is permitted.

The Palomares crash was the worst nuclear accident of its time, provoking worries that it would destroy tourism.

US authorities took away some 1,300 cubic metres of contaminated soil at the time, shipping it to the Savannah River nuclear reservation in South Carolina. The casings of two bombs recovered from the accident are displayed at the National Atomic Museum in Albuquerque, in New Mexico.