Hey, they just forgot to migrate! 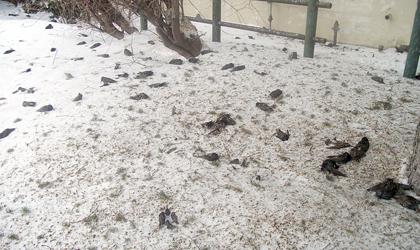 More than 200 starlings were found dead in downtown Yankton Monday. Officials attribute the cause of the deaths to the fact that the birds had not migrated from the area.

It is estimated that more than 200 dead starlings were found in downtown Yankton Monday. However, it is not believed the deaths pose a threat to humans.

Yankton Animal Control Officer Lisa Brasel estimated that she collected 200 starlings Monday, and employees of the city Parks and Recreation Department were also on the scene picking up deceased birds. The total number of corpses gathered up by city employees has not yet been compiled.

“I talked to one of the local vets, and they said there is nothing wrong (with the birds),” said Brasel, who took specimens to a veterinary office. “They just didn’t migrate and are dying. (The next question of a scientist should have been: Is there something wrong with the earth’s magnetic field or why else should birds ‘forget’ to migrate?) I was going to call the South Dakota Department of Health to see what they have to say about it, but they are closed today (because of Martin Luther King Day).”

The mass bird death in Yankton comes on the heels of other large animal kill-offs around the world that have people buzzing. Many began taking notice when, on New Year’s Eve, an estimated 5,000 blackbirds dropped dead in Beebe, Ark. Since then, reports of more bird deaths, as well as those of crabs, cows and fish, have come in from around the world. Some of the incidents have been attributed to pedestrian causes — birds colliding with objects and each other after a fireworks display, or cows with a virus — while others await explanation.

Some of the more creative accounts have the deaths related to secretive government experiments or, for those familiar with the movie “2012” and many books with similar apocalyptic predictions, the supposed end of the world.

However, scientists have been downplaying the events.

“Five billion birds die in the U.S. every year,” Melanie Driscoll, a biologist and director of bird conservation for the Gulf of Mexico and Mississippi Flyway for the National Audubon Society, told the New York Times recently.

That means 13.7 million birds die in the United States every day, the Times points out.

Nevertheless, the explanations of scientists don’t always ease the shock of seeing so many dead animals in one place.

Alison Brown, who works in the area where the birds were found in downtown Yankton, said at first the bird corpses just looked like clods of dirt under the trees. However, she later noticed the macabre nature of what she was seeing.

“I’m concerned as to what would be the cause of this,” Brown said.

She quickly recalled the reports of bird deaths she had seen on the news.

“The first thing I did when we saw the birds is, I looked it up online to see if they had figured out what caused the incidents in other areas,” Brown stated.

Brasel said that, in more than 10 years in the animal control field, she had never witnessed anything like it.

Late Monday afternoon, after city crews had picked up many of the birds, some corpses still remained.

“I would go to pick up one bird, and I’d find a pile four birds deep,” Brasel said.

Some dead birds remained clinging to the trees. She called the scene “creepy.”

“I did find a couple that were alive, and I took them to the vet clinic,” Brasel said. “They died within 20 minutes. They seem to be healthy. They are not skinny like they’re starving to death.”

She had also received a report of dead robins by a house in the city, but otherwise the bird deaths seemed confined to the downtown area where a thick flock of birds has been congregated for some time, flying between the trees and making a good deal of noise.